This year I’ll be working on an arts and music project with Adam Brewster in response to three places: the isle of Iona, Aberlady and the isle of Lindisfarne. Other collaborators will also probably be involved as the project develops, such as Donald Ferguson and Atzi Muramatsu.

I’ve worked with Adam, Atzi and Donald on previous projects, all viewable on the ‘Collaborations’ tab in the menu above,so I’m very excited about this one!

The theme is loosely based around the fact that in the 7th century, the route from Iona to Lindisfarne via Aberlady was a pilgrim route. Our project will involve themes I’ve been exploring for many years – landscape, spirituality and history and not least the element of mystery since not much is known of those times!

Adam will be creating music for the project and I’ll also edit a video showing footage of the places interspersed with Adam’s music and the three paintings.

Other than that, I plan to paint a bit less frenetically this year and solely on request, for example if a gallery would like to put on a solo or small group show, or private commissions, which will give me time to develop paintings more slowly and to explore themes in more depth.

I’ll post updates as I go, in the meantime, here are some photos of our recent trip to Aberlady and paintings from Iona and Lindisfarne from previous years … 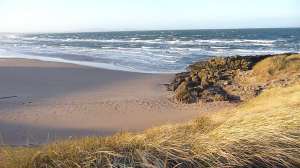 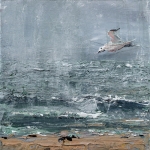 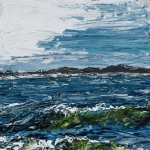 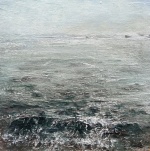 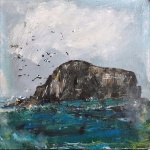 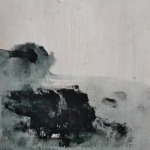 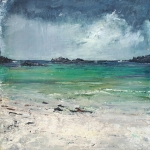 I mentioned a while back that a friend in the US, Clay Clarkson, commissioned me to paint something for a music CD cover that expressed hope after a long night. I painted ‘Ardban Light’ (above) in response.

Clay has now put together a CD with with music written by himself, friends and family for Advent, titled ‘Songs for the Long Night: An Advent Journey’; I’m honoured that my painting adorns this excellent CD!

You can listen to the songs (and buy the CD) Here.

All the songs are great, beautifully produced – a few of the songs are written by Clay and there’s one in particular ‘How Will it Be’ which I think is lovely. It features Clay’s daughter, Joy, singing. She shares with Clay a quality of voice that makes you want to listen – authentic, meaningful and with beautiful, melifluous tone. The CD is very Christian in theme, so it’s definitely one for those who find this time of year particularly meaningful; not just a time for family and gift-giving but a celebration of Christ.

I’m truly honoured that Clay chose my painting as the CD cover. I’m not part of any religious group as such, but I was very inspired by the subject and theme and painting this has been meaningful for me on my own spiritual journey.

Well done to Clay, Joy and all musicians and singers involved in the CD; lovely work, beautifully produced, which I’m sure will be welcomed and appreciated by many over Advent.

Here’s the link again … Songs for the Long Night

Wishing everyone a Merry Christmas and a Happy New Year!

The two paintings above will be on exhibition at the Royal Scottish Academy, Edinburgh, from 22nd December to 30th January 2020.

This is part of the annual Open Exhibition organised by the Society of Scottish Artists (SSA), who accepted me as a professional member in 2018. All details about tickets and venue Here

‘Giant Snowballs’ was inspired by snow sculptures on Arthur’s Seat, Edinburgh and ‘Wolf’ was inspired by watching the Seven Worlds series narrated by David Attenborough – the wolves were viewed through heat sensitive cameras, adding to their mystical presence – they looked primeval and otherworldly. I made a quick sketch in paint on canvas while watching, then surrounded it in thick layers of white gesso.

The exhibition launches 22nd December, all details on link above.

Above, my two paintings, on a winter theme, available for sale at the SSA  (Society of Scottish Artists) Open Exhibition, which launches 22nd December and ends 30th January 2020. Venue – the Royal Scottish Academy on the Mound, Princes Street, Edinburgh.

I’ve been a member of the SSA for many years, and was delighted to be accepted as a professional member last year.

It’s a huge exhibition, featuring the work of artists living in Scotland as well as international artists, always innovative and well worth a visit!

‘Winter Miniatures launches this Sunday 8th. 2pm to 7pm. One day only. All paintings below. 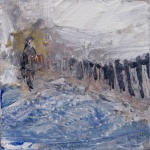 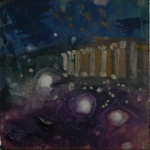 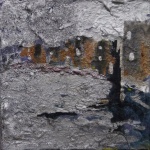 Above – walking through city snow (I hope that’s what it looks like!) 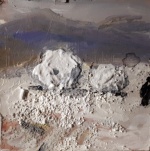 I took photos of these in electric light, so it doesn’t show colours quite accurately. Winter evenings are such a pain for painting and photography! I’ll be uploading them in higher quality tomorrow.

Today I’d like to post about the inspiration, myths and stories behind this beautiful digital animation (below) by animator Adam Brewster, who also composed the atmospheric music accompanying the animation.

There are layers of inspiration here, of imagination between art and music and from artist to musician, which I’d love to write about. First though, here it is …

When you look at this photo below, of St Anthony’s Chapel on Edinburgh’s Arthur’s Seat, it seems obvious that it was the original inspiration, but in fact Adam’s animation was in response to themes of the ‘Planets’ project this year – the idea of Medieval cosmology and the influence of the planets on the atmosphere of earth. It was only after creating it that he realised the image was of St Anthony’s Chapel.

I’d been painting a series of ‘Planets’ paintings, inspired by the works of C.S. Lewis and by author Dr Michael Ward’s book ‘Planet Narnia’, which described how each of the Chronicles of Narnia are in fact written ‘under the influence’ of each of the planets as understood in Medieval cosmology.

It’s a beautiful, poetic and holistic (if astronomically inaccurate) view of the cosmos and our place in it. As C.S. Lewis wrote, it is; ‘of value in our times’.

Adam Brewster’s music to accompany the animation though, stems back to a couple of years earlier…

He’d been inspired to write the music following a series of paintings I’d created called ‘The Winter Series‘, in particular ‘Sacred Well’ (below).

I’d created this painting with an experimental approach, so it was only towards the end of painting it that I realised (similarly to Adam’s process) it reminded me of St Anthony’s Chapel in winter, looking across St Margaret’s Loch. Adam left the exhibition launch of ‘Winter Series’ and on that same night, and the next day, created the beautiful music accompanying his animation. What’s fascinating is that the music, two years later, so perfectly fits the animation. (no prizes for guessing who bought ‘Sacred Well’!)

The story goes farther back though; In June 2017 I’d created a series of artworks called ‘Wells of Arthur’s Seat’, in which I explored the myths and history behind St Anthony’s Chapel and Arthur’s Seat.

As recently as the 19th century, local inhabitants of Edinburgh still visited the Well near St Anthony’s Chapel, where they’d pray for healing. The practice had been outlawed during the Protestant Reformation as ‘devil worship’, since it echoed past pagan rituals evoking local deities as opposed to the one Christian god.

Yet, the Well worshipers had usually adapted their pagan beliefs to incorporate a Christian god – the two merged and in our times it seems as acceptably Christian to revere the health-giving properties of the Well as to revere God in a traditional church. (This was undoubtedly why I found the notion of Medieval planetary influence in the cosmos, as explored in C.S. Lewis’s Narnia Chronicles, so intriguing – in Lewis’ work the Pagan and Christian interweave – a fact that still angers or upsets some Christian groups even today).

I’d become inspired by all of this and in early 2017 I’d been researching the history of the well and Chapel. I created a series of paintings in which I attempted to evoke the atmosphere or ‘good magic’ of the wells of Arthur’s Seat. Adam accompanied me on some of these excursions to the well and chapel. (They’re just five minutes walk from my house in Abbeyhill).

Perhaps there’s something in the atmosphere of these sacred places that draws us, again and again. In the case of St Anthony’s Well and Chapel, over hundreds of years. We seek meaning and some might believe that to seek meaning in ancient remains is mere nostalgia, but I’d agree with C.S. Lewis; we yearn or seek for something beyond ourselves and our identity – a higher meaning perhaps that has no place in time.

I don’t think I’ll ever reconcile myself to one religious group or affiliation, though not for lack of seeking. And I’m not a poet so it’s difficult to pull together all the ideas I’ve touched on in this post in a coherent, meaningful or elegant way. Larkin’s oft-quoted An Arundel Tomb (below) says everything I can’t!

Lastly, thanks to Adam Brewster for the continuing inspiration and for composing Winter Rose back in November 2017, that now so perfectly accompanies the Seven Heavens animation.

Side by side, their faces blurred,
The earl and countess lie in stone,
Their proper habits vaguely shown
As jointed armour, stiffened pleat,
And that faint hint of the absurd –
The little dogs under their feet.

Such plainness of the pre-baroque
Hardly involves the eye, until
It meets his left-hand gauntlet, still
Clasped empty in the other; and
One sees, with a sharp tender shock,
His hand withdrawn, holding her hand.

They would not think to lie so long.
Such faithfulness in effigy
Was just a detail friends would see:
A sculptor’s sweet commissioned grace
Thrown off in helping to prolong
The Latin names around the base.

They would not guess how early in
Their supine stationary voyage
The air would change to soundless damage,
Turn the old tenantry away;
How soon succeeding eyes begin
To look, not read. Rigidly they

Persisted, linked, through lengths and breadths
Of time. Snow fell, undated. Light
Each summer thronged the grass. A bright
Litter of birdcalls strewed the same
Bone-littered ground. And up the paths
The endless altered people came,

Washing at their identity.
Now, helpless in the hollow of
An unarmorial age, a trough
Of smoke in slow suspended skeins
Above their scrap of history,
Only an attitude remains:

Time has transfigured them into
Untruth. The stone fidelity
They hardly meant has come to be
Their final blazon, and to prove
Our almost-instinct almost true:
What will survive of us is love.