At last I finished putting together my small video response to our Hebridean journey (link below).

It’s been a bit delayed as I was waiting for music and poetry, then the tricky aspect of fitting the timing of music and poems together with images, and a few shots of the islands themselves.

(detail) Landscape with the Fall of Icarus, c.1555 (oil on canvas) by Bruegel, Pieter the Elder

I’ll return to this project with new improved equipment in the next few months, and with a clearer idea of how all the elements fit together. Definitely poetry readings by Louise will work best. Though as it is I find certain elements work beautifully. I like the way Lewis poet Ian Stephen’s reading leads into the journey, and Louise Palfreyman’s poems exquisitely capture the atmosphere of Callanish and Liceasto in Harris.

Listened to at a reasonable volume, you can hear me sing in the car after the Callanish section, Atzi mentioned he’d used this as inspiration for the intro music!

It’s the final section that really works for me though, with Louise’s ‘Hebridean Light’ and Atzi Muramatsu’s music soaring and suspenseful – I found it poignant, it made me think of the flight or fall of Icarus (also the painting by Breughel) and I couldn’t get the poem and music out of my head when I went off to bed. Various musical accompaniments suggested themselves; the poems being sung perhaps…

Anyway, enough of my havering, here it is…

A couple more small paintings today for the series, which I’m adding to an upcoming sale (feel free to email if you’d like details).

The video about our Lewis and Harris trip with paintings and poetry is delayed somewhat but should be edited by the end of this week, then Louise and I will send off our application for An Lanntair in Stornaway.

Whether or not that’s successful we’ll be putting on an exhibition this summer in Edinburgh at Whitespace in Howe Street, for which I’ll create a series of larger paintings based on these recent experiments.

Here they are so far.. 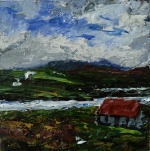 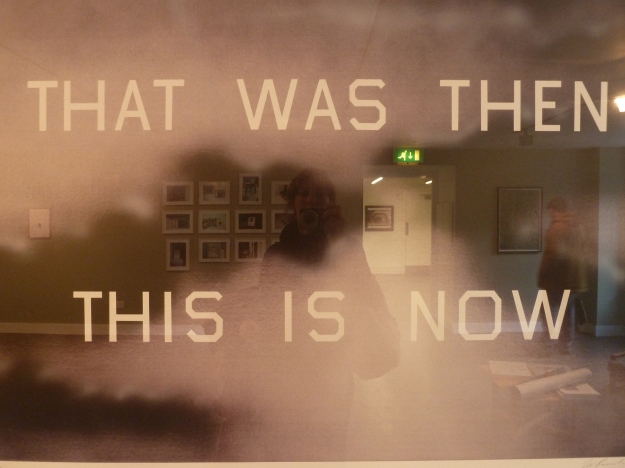 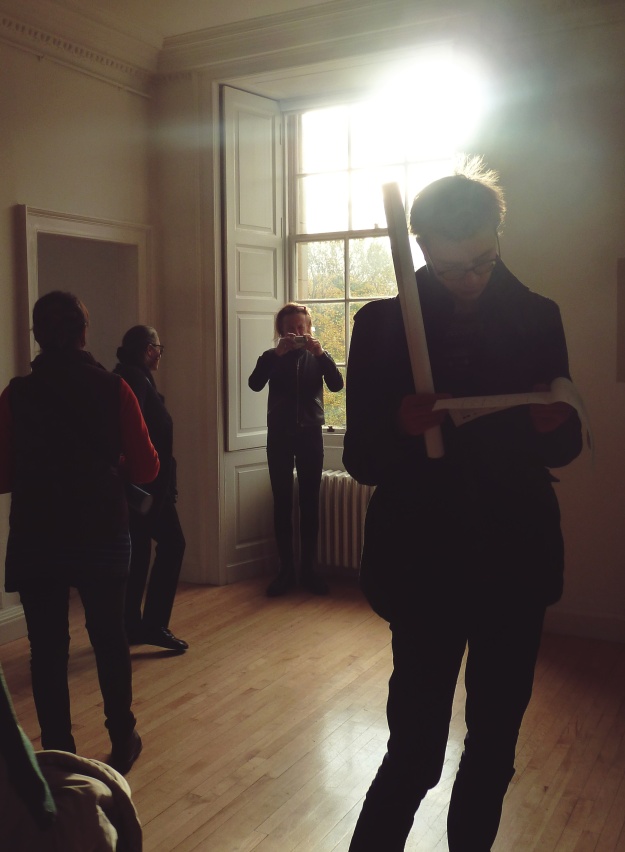 Today’s paintings in progress, of the Isle of Harris.

I was ‘channeling’ Frank Auerbach a bit on the very textured paintings (at least in terms of impasto paint application if not talent!) A camera tends to flatten out texture, so I’ve taken one sideways to show the thick layers –

Most of Auerbach’s works are portraits, but here’s a landscape example below –

I remember gazing in fascination at one of his thickly textured portraits at Inverleith House Art Gallery in Edinburgh’s Botanic Gardens as a teenager.

As with many others I was shocked to hear the recent announcement that the gallery will be closed due to funding cuts. Arts critic Joyce MacMillan began a petition online (link below) which you can sign to show your support for the gallery to remain open. I remain hopeful! 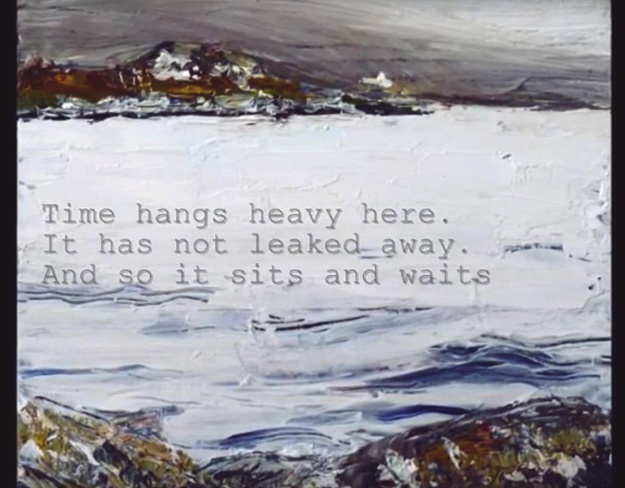 A still of the little video I’m making of our collaborative response to Lewis and Harris, with an excerpt of Louise’s poem – ‘At Liceasto’

I’ve been re-editing this, also meeting with Atzi Muramatsu today to discuss music, then I’ll layer on the final edit with music and it should be finished by Thursday or Friday. It’ll be a taste of a longer video I’ll create later this year.

There will be an online sale of the first series of small paintings on wood – around twenty works at 5×5″. Updates after November 5th. These are the first three:

Also having fun with one of my Harris photos today – v retro and 2001 Space Odyssey-esque don’t you think, appropriately – as the Harris landscape was used by Kubrick for the Jupiter scene.. 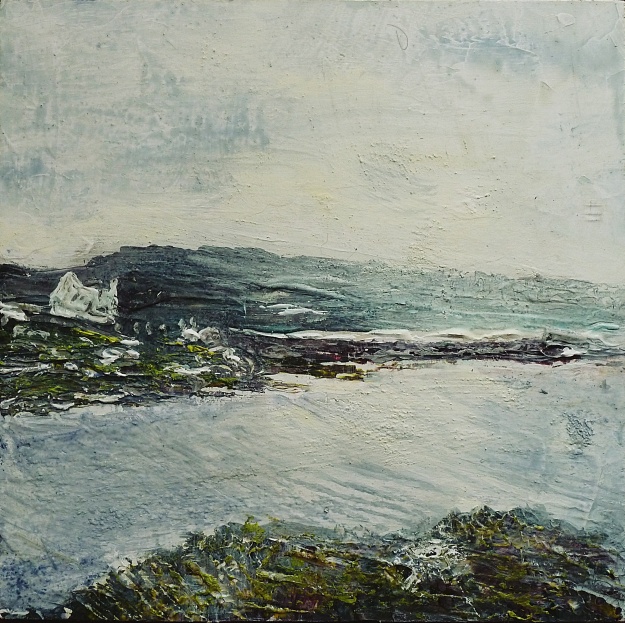 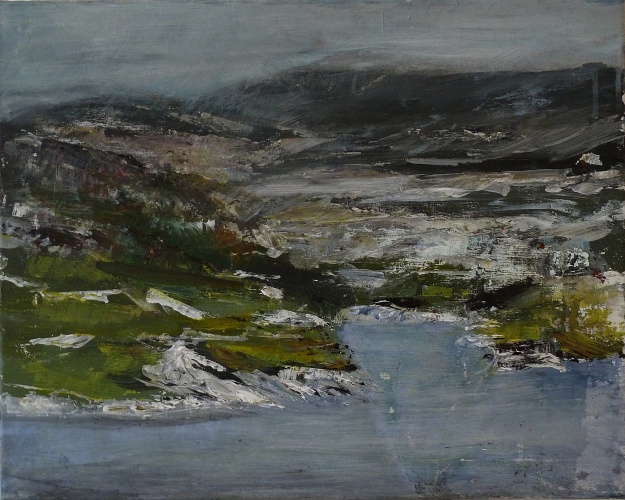 The diffuse light effect is mostly gesso layers on top of dry paint – it’s usually used as a base, but it’s less opaque than titanium white and I’ve always liked the atmospheric effects, along with thick paint applied with palette knife and salt which gives gritty highlights.

I’m really tempted to publish one of Louise Palfreyman’s poems here to illustrate how well these all work together, but I’ll wait until I’ve edited the video, and Atzi Muramatsu has responded musically (though Louise might publish on her own blog – viewable Here)

More works in progress, above.

I spent a couple of days editing the video of my paintings and Louise Palfreyman’s poems, which I find beautifully evocative of the landscape – capturing her visceral response whilst subtly touching on some of the ideas, context and history of Lewis and Harris.

Then I realised I wasn’t entirely happy with the paintings. Or to be more accurate, Atzi Muramatsu (the cellist we’re collaborating with on this project) came round to my flat to discuss music for the project, watched the first draft video then said he knew I could paint something more atmospheric. I thought so too – I’d got caught up in video editing when my focus is painting!

I’m still trying to capture the mood and feel of the landscape at this stage, experimenting with what works, things haven’t entirely fallen into place yet, so I was grateful for the reminder.

More paintings, poems, music and video to follow, in the next few weeks…

Today’s been quite productive and I can see the kernel of a series taking shape – the colours, shapes and brushwork. The series (which will include at least 20 small works on wood, and a series of 3 etchings) will follow the journey from Ullapool to Lewis then Harris.

These are an ok start. I think they’d work well as a block;  a bit like a wall of tiles, where the sense of changing light and landscape can be seen as a pattern, which will take a bit longer to emerge…

The painting of a small boat seen at a distance in fading light (from the ferry to Stornaway) took several variations (images below) the first of which was best. I’ll work more on this tomorrow – the key is a very fast, instinctive paintwork and I was annoyed at myself for fussing and changing what I knew worked better in the first place!

I’m also playing around with the idea of luminous lines – an idea which began as imagining lines echoing the landscape in luminous night-glo tape and words for Louise’s poems.

Easy to think of, tricky to do! (the image on left shows the basic idea, though the reality would be smaller scale, tape affixed to fences etc).

Since we’re applying for the An Lanntair project which has a small budget, I’ll put this idea on ice for the moment, but it can be reflected in paintings and etchings, for example the lime-green line next to the Callanish stone in ‘Callanish 1’ above.

A bit more work on the painting of Coigach mountains from Achnahaird beach near Achiltibuie, I’m not sure if it’s improved or not! Here are previous version (below) which didn’t really get the Achiltibuie light effects which were very soft that day.

From next week I’ll be working on a series of twenty 5×5″ paintings on wood of Lewis and Harris..