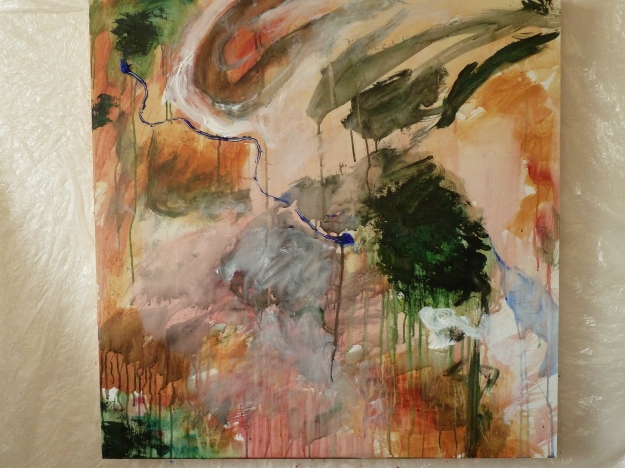 This the start of three large paintings I’m planning over the next few months on the theme of Damascus. This first painting in progress loosely follows a map of Damascus from above, which I saved from Google Maps. It shows the River Barada flowing into the centre of the city all the way from the mountains of Lebanon to Umayyad Mosque.

It’s a difficult theme, which will be a challenge but it’s sometimes the paintings I find emotionally difficult that turn out to be most affecting.

This early stage of the painting is reminding me a bit of the work of Cy Twombly, which was not at all intentional. I had intended to make a sort of subtle relief map, then got some paints in my hand and went off in an entirely different direction without really thinking. I think I’ll continue to build up these transparent layers. I’ll also be exploring patterns that echo the colours and Syrian designs of the Damascus rose.

Watching the unfolding horror of the war in Syria can feel too much to take in. It’s hard to imagine, or want to imagine, how it feels to see the city you were born in destroyed and everything familiar turn to dust.

Sometimes it’s peripheral things that lead you to a place where you can allow yourself to feel or try to empathise with such painful reality. I recently discovered the poems of Bejan Matur, a Kurdish poet from Turkey, whose work often deals with the ravages of war. The following poem is called ‘Being’…

Time of roses
And autumn
Long ago dust mingled with bones
And the universe ceased.
Being
Beginning in the home and never-ending.
New words should have summoned you
The pattern of dust should have shown what was to come
And you remaining still far off.

Roses are a universal symbol of love, particularly in Middle Eastern culture. I recently ordered a few mls of pure Damascus rose in absolute, because production of Damascus rose oil has recently almost come to a halt for obvious reasons. In years to come, images of death and rubble will come to mind when we think of Syria, but the farmers who tend the roses of Damascus live in hope that peace is in the not too distant future, so they will return to producing the world’s most famous rose (the scent is familiar to us in perfume, rose water and ‘Loukoum’ – known as Turkish Delight in the West). This poem by Matur is called ‘Peaceful Morning’ …

A time before time
A morning of peace
Of roses
And fountains.
A welcoming
Of the creatures
Of the latecomer
Rescued from the hand of sleep
In the dappled dawn.
So arms
Moved away from a statue’s body
And found a human.
Desired.
What belonged
Far more than words
Was love.

While I was reading the work of Matur and researching the Damascus rose, I had a song constantly playing in my head; Kate Bush’s new version of ‘And dream of sheep’, about a woman lost at sea, longing for sleep and oblivion from pain, and at the same time connection and home. She had the song recorded live while she was immersed in water. (video below)

If you like, you can click on this link to donate towards medical supplies for hospitals in Aleppo https://www.justgiving.com/fundraising/alightforaleppo-MSF

This is an upcoming charity art auction and event for which I donated one of my paintings from the ‘Harbours’ series (‘Crail’, below)

It’s organised by Artlink Central who support and promote the use of art for health and well being.

The event starts at 7pm on the 19th November, lots of artworks big and small by many of Scotland’s leading artists . Nice ideas for for Christmas presents maybe?! 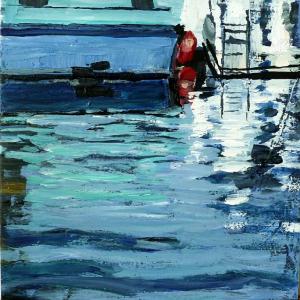