In October last year I decided to paint a portrait of Richard Demarco.  It’s been a hugely enjoyable challenge to create this portrait, not simply because I’ve known Richard Demarco since 1999 and found his work an inspiration, but also because I took time to consider what I wanted to portray.

A straightforward portrait or reasonable likeness could have been completed in a few days, but the challenge for me was how to encapsulate the wealth of ideas, experiences and artistic references; everything from the concept of the Road to Meikle Seggie and the artists Richard has collaborated with over the decades, most notably Beuys, Abramovic, Kantor and Neagu, but more importantly a belief that the role of the artist is to witness and communicate truth, that art might open dialogue and therefore has potential to heal the trauma of war.

The backdrop of the portrait is a wood panel painted with blackboard paint, the portrait itself is painted free-hand with gesso, on Richard’s left is a rough copy of Beuy’s drawing of a stag, its antlers reach up to the pencil drawing of three telegraph poles representing the road to Meikle Seggie.

While making this portrait, I was considering Richard Demarco’s role in creating artistic dialogue between war-torn countries, and the fact that both he and Beuys sought a creative approach that crossed boundaries and promoted healing in post-war Europe. I hope this portrait expresses renewal of faith and love in dark times and the unfailing determination Richard brings to his work.

The responses of Richard Demarco and Terry Newman (Deputy Director of the Demarco Trust) today were very rewarding. Richard very kindly remarked it was the best portrait of himself he’d seen! I tend to think the portrait by artist David Mach is the most impressive, but I think Richard was responding to the ideas I attempted to express with this portrait. It’s now a permanent part of the Demarco Archives, viewable at Summerhall in Edinburgh.

More work on the West Coast of Harris paintings today for upcoming February exhibition at the Limetree Gallery in Bristol. 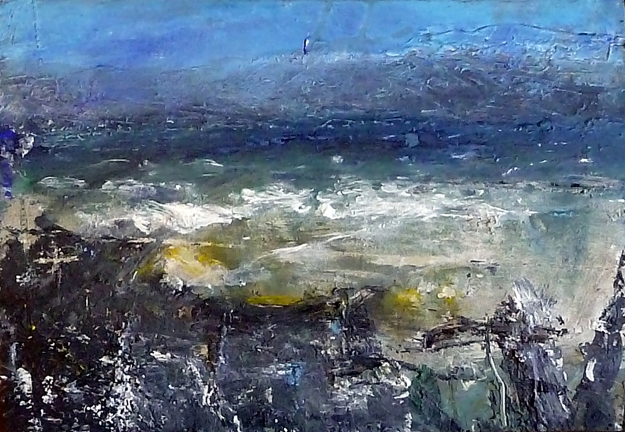 Again the light had faded before I took these photos so these are blurry due to a high light setting on the camera, also colours distorted, this time of year is such a pain for painting! 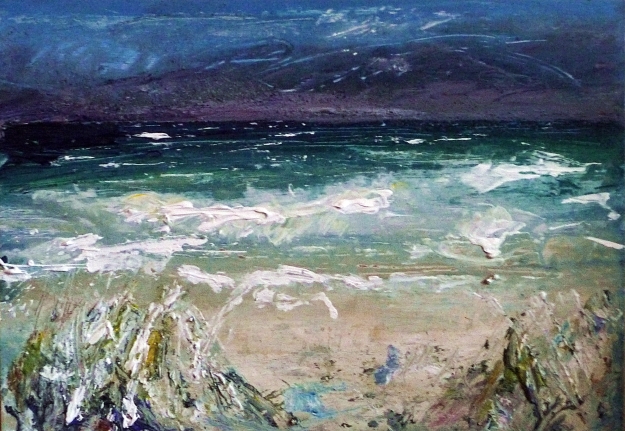 Before I get started on the portrait of Richard Demarco, I’m creating 4 new paintings for the upcoming group exhibition at the excellent Limetree Gallery in February. They liked the west coast and Isle of Harris paintings in particular so I’ve returned to that theme but focussed more on the sea.

Since the light fades by about 3pm in Edinburgh just now these photos are a bit blurry, so I’ll re-post more tomorrow, also I’ll be painting the more rocky wild shores of the east coast of Harris.

The two above (which need a bit more work) are of Luskentyre beach on the west coast of Harris. I was fairly loose with the brushwork, also the blues and greens are always a pleasure to work with – Prussian and Cerulean blue, Ultramarine mixed with Alizarin Crimson, Viridian green and lemon yellow, if you’re interested in such things! It’s undeniably upifting to paint these translucent colours against the white sand. As always I’ve chucked a bit of texture in there with sea salt, also some peat ash from my fire, the ash is warm beige/grey and a surprisingly good match for some more shaded aspects of the sand.

It’s good to be painting again after all the festivities, probably similar to most artists I don’t really feel relaxed unless I have some paintings on the go. It’s also a genuine pleasure to exhibit with the Limetree, who continue to be great to work with. Have a look at their website below where you can look through the works by artists they represent – there’s an excellent selection – covering abstract, semi-abstract, figurative and landscape painting by some inspiring, talented artists – http://www.limetreegallery.com/

Not long after, towards the end of November, I was dismayed to hear that Richard had suffered a stroke, then very relieved indeed to hear that he is recovering – as active as ever – albeit with some loss of feeling in his right side which restricts his ability to paint. This must cause much concern for someone who has painted all his life. Along with many hundreds of other people, I wish him a speedy and full recovery.

In this recent interview with Scotland’s Herald he discusses this, also the need for permanent housing and full ongoing creative development of the Demarco archives, currently at Summerhall in Edinburgh, which he describes as more of a ‘gesamtkunstwerk’, needing ‘curation and study’. Article Here

It didn’t feel right to go ahead with my portrait until having dropped by to say hello, which I did in December during Richard Demarco’s Christmas celebration at Summerhall. I was very cheered to be greeted with a characteristicly warm hug and to find him in equally characteristic enthusiastic conversation.

I’ll be resuming the portrait this month. The wood board is primed (with blackboard paint not gesso, more on that later ..) Je suis près as they say!

If you have any questions feel free to email me at rose.strang@gmail.com 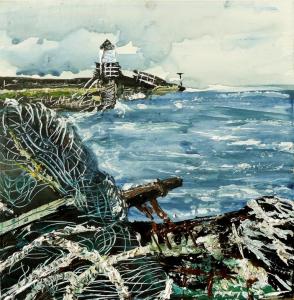