Above – today’s continuing experimentation on the painting – ‘January’.

I’m currently painting a series of seven paintings inspired by the Medieval view of the cosmos and the Narniad. You can read the earlier posts here – 1 , 2  and 3

The current planet I’m exploring is Saturn, related to December and January. In the last post I described my interest in the planets as a subject, and I’m not too structured about this, so other than exploring the planets in their Medieval order I wouldn’t be described as academic in my approach! It’s simply inspiration for painting a new series.

My painting process is usually quite experimental – often I’ll create layers then scrape back to reveal earlier parts of the work and I tend to feel my way through a subject – there’s a certain amount of planning and preparation but usually it’s a messy process, so although today’s painting looks like a wave, that might change by tomorrow.

The painting (which is about 3.5×3.5 feet on wood) started with a thin layer of green onto white gesso, then a layer of black, followed by droplets to suggest stars. I experimented with Saturn-appropriate constellations (Capricorn and Aquarius) but it didn’t quite work for me visually, so I scraped back a few layers at the bottom to reveal interesting green patterns below, suggesting a nocturnal seascape, today’s layer of wet gesso will be left to dry, then I’ll scrape back to more layers beneath, possibly add in a few details and then I’ll see how it looks/feels. 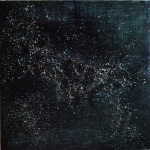 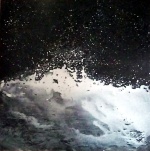 Atmosphere is the elusive thing I try to capture in paintings, so with the melancholic, heavy associations with Saturn this is going to be a fairly moody dark painting let’s face it, but I do want it to evoke a sense of mystery or magic.

As mentioned in previous posts, I’m reading several books at the moment related to the subject of the Medieval view of the planets, in particular Michael Ward’s Planet Narnia , in which he describes and explores his discovery that the seven books of Narnia are each inspired by the seven planets as understood in medieval times, also the philosophy and mythology that surrounded their view of the cosmos.

C.S. Lewis felt that myth was one of the most effective means of conveying the more abstract themes of spirituality or metaphysical ideas, partly because he felt that myth and story sparked imagination – abstract perception beyond the purely factual or observable (that’s an epic subject in itself – one I explored way back in the mists of time at art college, but I’m not writing in any sort of academic capacity here, thankfully for me!). He began the Narnia Chronicles in the early 1950’s,having decided that children’s stories were the ideal form for what he wanted to communicate.

He’d also been inspired by George MacDonald’s writing, and when you read MacDonald’s books you do see the influence. Like MacDonald, Lewis had also written fiction for adults, but similarly their children’s stories had the most popular and enduring appeal.

The sense of depth behind the apparently simple tales in books such as The Lion, the Witch and the Wardrobe and The Princess and the Goblin (by MacDonald) is partly due to the underlying wealth of mythology and philosophy, and the magical atmosphere created is also partly due to this underlying (or hidden) meaning, but I think it’s also the fact both authors were (to use a contemporary literary term ) ‘show not tell’ writers.

It’s maybe best described as magic realism –  grounded in the senses and more effective in some ways than writing pure fantasy or a form of science fiction which might alienate the reader with too heavy a slant on stranger, or unknown aspects (though Lewis’s ‘Space Trilogy’ written in the 1930’s was classed as sci-fi).

It’s different from pure allegory, in as much as the reader isn’t required to spot and understand obvious parallels to enjoy the story, though the stories touch on subjects that refer to myths (for example Norse and Greek), or Christian biblical themes. Lewis wanted to inspire imagination, so although the Narnia Chronicles often deal with moral issues or choices, it’s more about a search for truth. That’s a simple way of putting it though  – a way of becoming more fully conscious is maybe a better way to describe it.

I think I’ll explore that theme more when I tackle the subject of Jupiter in my next painting, because I think C.S. Lewis writes about it in a completely unique way that we easily (usually with a mixture of amusement and/or discomfort) recognise as all too human, it’s worth exploring.

On the subject of atmosphere though, Michael Ward explores this quality in some depth in Planet Narnia, he terms it donegality. I think his is a brilliant way of perceiving atmosphere in the Narniad – I won’t go into that here, but recommend you read his book since it’s a fairly complex, rewarding theme.

As a child, this atmospheric quality of the Narniad had a profound impact on me and it’s one I’ve noted in other people who grew up reading these books; whenever I’m in a landscape that feels magical, or particularly alive, I associate it with a ‘Narnian’ quality – for example the rich, cool-green dampness of mossy grass underfoot in a still forest, to me immediately conjures up one of my favourite passages from The Magician’s Nephew, from the chapter titled The Wood Between the Worlds:

The trees grew close together and were so leafy that he could get no glimpse of the sky. All the light was green light that came through the leaves: but there must have been a very strong sun overhead, for this green daylight was bright and warm. It was the quietest wood you could possibly imagine. There were no birds, no insects, no animals, and no wind. You could almost feel the trees growing. The pool he had just got out of was not the only pool. There were dozens of others – a pool every few yards as far as his eye could reach. You could almost feel the trees drinking the water up with their roots. This wood was very much alive.

The mood is enhanced by the beautiful illustrations by Pauline Baynes, which are so much part of the experience of reading these books.

The Magician’s Nephew is associated with the planet Venus, and the above description is very Venusian in feel, in complete contrast to the heavy dark energy of Saturn that influences The Last Battle – last of the Narnia Chronicles.

I’ve also realised that gradually my painting (atmosphere-wise) appears to be heading towards the end of the book where the stars fall out of the sky and Father Time crushes the sun in his hand so the world of Narnia turns black and icy cold.

It’s a stark, haunting vision, but described by Lewis it’s nonetheless beautifully atmospheric. And, as I’m writing this, I’m thinking ‘of course Rose – paint a scene from imagination from each of the books’.

Whatever I paint I’d better get on with it as these first three planet paintings have to be submitted to the upcoming Battersea Art Fair by the 24th Of February (I’m showing with the Limetree Gallery) and I still have Jupiter and Mars to complete! Towards June I’ll be creating a Sun-themed painting, to coincide with an exhibition and event I’ll be holding at Abbeyhill Studio on the summer solstice (I’ll post more nearer the time).

1 thought on “Planets series in progress – 4”