I was standing today in the dark toolshed. The sun was shining outside and through the crack at the top of the door there came a sunbeam. From where I stood that beam of light, with the specks of dust floating in it, was the most striking thing in the place. Everything else was almost pitch-black. I was seeing the beam, not seeing things by it.

Then I moved, so that the beam fell on my eyes. Instantly the whole previous picture vanished. I saw no toolshed, and (above all) no beam. Instead I saw, framed in the irregular cranny at the top of the door, green leaves moving on the branches of a tree outside and beyond that, ninety-odd million miles away, the sun. Looking along the beam, and looking at the beam are very different experiences.

As mentioned in yesterday’s post, I’m painting a new series inspired by the classic Medieval view of the universe, in particular the planets. It’s a complicated picture and (though scientifically inaccurate!) quite beautiful in its imagery, mythology, associations and sense of unified harmony.

I’ve long been inspired by Medievalism, no doubt originally inspired by reading the Narniad, as it’s known today, by C.S. Lewis

The above quote by C.S. Lewis (left, enjoying a cigarette – absolutely unacceptable in these times!) is a wonderful illustration of his way of explaining philosophical concepts through lived experience and imaginative observation. It’s probably one reason for the enduring appeal of his Narnia Chronicles and writings on Theology.

Lewis had read the philosopher Samuel Alexander’s theory of Enjoyment and Contemplation, which crystallised ideas he’d been exploring. The quote above illustrates the difference beautifully; contemplation of the beam of light is a different experience to being in the beam of light – you’re no longer looking at light, you’re in it, or in other words experiencing it subjectively (enjoyment) not objectively (contemplation).

For Lewis this concept informed his writing and way of life. It’s well-known that Lewis was a committed Christian (incidentally if it’s of interest this is not how I’d describe myself – I’m not a member of any religious group, though I find Lewis’s exploration of Christianity fascinating and inspiring).

As an academic he specialised in Medieval and Renaissance literature and one of his expressed regrets was the way that Medieval myth and imagination had been sidestepped or rejected by later religious practice or theology.

It wasn’t just that he found Norse, Roman, Greek, Hindu (or any source of ancient mythology) fascinating, he also felt as a Christian that exploring these myths, or finding them spiritually inspirational was as valid an aspect of worship as following Christian religious doctrine. Similar to Blake in some ways, he profoundly appreciated the power of imagination – for Lewis this partly informed ideas about Enjoyment, as opposed to Contemplation.

At the moment, I’m reading Michael Ward’s Planet Narnia, (for which I’m grateful for providing much of the information about Lewis described above) in which Michael Ward describes and philosophically explores his discovery that each of the Narnia Chronicles was in fact inspired by the seven planets as understood from a Medieval perspective. C.S. Lewis never stated this as his partial inspiration at the time, though in retrospect, once explained, it’s startlingly obvious. It is as he states himself, surprising that he was the first person (publicly at least) to recognise it.

My painting in progress (at the top of this post) is the first in a series of seven I’ll be painting this year. I’ll write more about the inspiration as I go, but this one, titled ‘January. Nightscape’ is inspired by the planet Saturn – a somewhat dark and heavy energy by all Medieval accounts! I’ll write more about  Saturn and its influence according to Medieval mythology as the painting progresses this month.

Of interest to C.S. Lewis appreciators, the correspondingly Saturnine Narnia book is ‘The Last Battle’ (last of the series). Lewis, in keeping with the quote at the top of this post, doesn’t mention Saturn (as far as I recall) in the book, but the book is saturated with its influence throughout. I’ll explore this more as my January/Saturn painting develops.

These dark January days, I’m finding it therapeutic to light the fire, of an evening, switch off all the wifi, mobile and other distractions, and immerse myself in a book. I also really enjoy keeping an arts diary (this blog) as a way of recording my inspirations.

Also, on a pragmatic note, the resulting paintings will be for sale in the galleries that currently represent my work, namely the Limetree Gallery (Bristol), Resipole Gallery (Acharacle, Scotland) and Morningside Gallery (Edinburgh). I appreciate their support, also the supportive creative ethos of these galleries to artists they represent.

In the meantime, Happy January to readers of this blog – it is indeed a dark month here in the Northern hemisphere, I hope you’re finding ways to enjoy it! 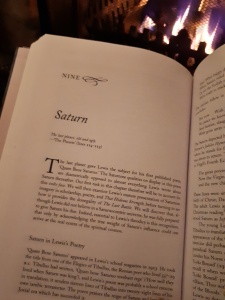 5 thoughts on “Planets Series in progress – 2”