Happy days. I love it when work and ideas merge together into new forms.

The above painting is North, second in the series of three paintings for the upcoming Eigg Island exhibition. It was inspired by  a day in September on the last visit to Eigg, on the geology trail with geologist Prof’ John Hudson, who showed us fragments of bone from a Pliosaurus (estimated to have lived about 147 million years ago).

Atzi Muramatsu began (unbeknownst to me!) to write a music piece which became ‘Gaea Metempsychosis’; a piece for string quartet, which will be performed at the exhibition launch.

It occurred to me after a day of painting the final touches of North that it would make perfect sense to add Atzi (the musician I’m collaborating with alongside poet JL Willams for the exhibition) on the cliff. Once painted I gave him a quick call to make sure he didn’t feel a bit ‘Dorian Gray’ or superstitious about it, but he thought it was a great idea as long as it worked for the painting!

‘Metempsychosis’ is a Greek word meaning transmigration of the soul – or its reincarnation after death, ‘Gaea’ meaning of course – the earth. So the inspiration of fossils, and of being on the island in a particular moment in time, yet feeling the sense of our own infinity – and that, like fossils, we become part of the landscape once more, was the inspiration behind Atzi’s music.

North’s place in the trilogy of paintings, is to represent the idea of the reality of being on a Hebridean island, after imagining what that experience will be like, because to me there’s always a time when you feel not a part of the landscape, you’re not sure of your place in this wildness of sea and cliffs, although of course we are a part of it.

I have a piece of marble that I collected from the Isle of Iona (the beautiful small island off the coast of Mull on the west coast of Scotland). It represents the idea of ‘Gaea Metempsychosis’ exactly to me. Iona was the first place where, in my early twenties I felt a powerful connection to nature – I felt my place in the cycle of everything.

from millions of years ago, their remains crushed by the weight of  rocks and ocean over time into dense, heavy white marble. You can see seams of serpentine – a silicate formed by algae and water that ran into cracks and faults of the marble.

It’s so beautiful, and it’s from a very rare seam of marble on the south side of the island that’s pretty difficult to find for newcomers. Islanders mined it about 100 years ago to form the alter in Iona Abbey, but to me it’s is best experienced on those south cliffs of Iona, looking out over a wild blue sea.

It’s quite difficult to express how rewarding collaboration is; when ideas connect – also the way that nature inspires and makes meaning of our lives. I felt very similarly about the recent Lindisfarne collaboration with poet JL Williams – view video here – When you write to the light.. 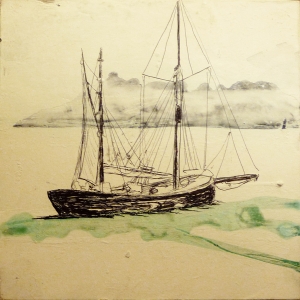 Today’s sketch is of the lovely sailing boat called The Leader which sailed around Eigg while I was there. To be more accurate (I’m no boat expert) it’s described on the website as a gaff-rigged ketch – built in Brixham, Devon in 1892.

Apologies for the delay in posting this blog. I’d aimed to post every day but events have a way of taking over don’t they?!

At the moment I’m applying for crowd funding from Ideas Tap for next year’s Eigg exhibition and awaiting results from my application to Creative Scotland, but like everyone else in Scotland I’m also steeped in referendum news. It’s getting quite fraught in the run up before the Scottish referendum results on Friday, and all social media is teeming with posts, campaigns and opinions.

I’ll be attending a referendum results party as part of an exhibition at Edinburgh University’s Talbot Rice gallery, where a mix of yes and no voters will watch results between 11pm to 6am, at which time. Depending on the result, 12 confetti guns will explode, or not!

It’s called ‘After the revolution, who will clear up the mess’. And I think it’s a great way to be with fellow voters, whether they’re yes or no, so we can all give each other a hug on Friday morning. It’s going to be emotional, I can tell!

I think I can date my decision to vote Yes to independence from April this year, when I visited Eigg and saw for myself how autonomy benefits communities. Without this, Eigg would never be in the position it’s in now, with young people moving back to the island because there are more opportunities, and the 24 hour renewable energy system. Previous to the community buy-out in 1998, the community of Eigg wouldn’t have had decision-making powers on energy, or jobs or houses. (You can read about how it happened Here )

This September visit to Eigg was very illuminating as there were more events and people to meet. Chatting to people there I learned that there are plans to fund a documentary about the island, but previous filmmakers have wanted to somewhat romantically portray this as wild island with indigenous Scots working away in candle-lit bothys! But the reality is an island of Scottish, English and people from other countries who want to see progression, whilst also protecting their way of life and landscape. It’s no doubt complicated at times, but ultimately collaborative because the islanders are equal to one another in terms of ownership of the island.

I’ll be working on more paintings over the next few weeks, and updating on news about next year’s exhibition at the Scottish Storytelling Centre. In the meantime, here are a few more photos from my recent trip.. 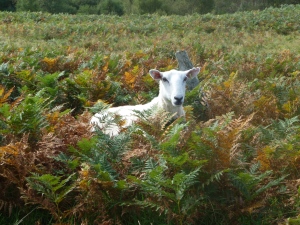 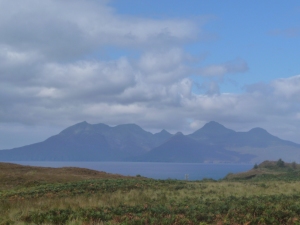 A Schueler-inspired early evening sky. Or to be accurate, the sunset looked very Schueler to me, if not my painting!

Jon Schueler was born in 1916 in Wisconsin, and was around at the time of the later school of American abstract expressionism, (though he never felt particularly part of that movement). He moved to Mallaig (the ferry town on the mainland near Eigg) in 1957 and set up his studio there for a year. He returned many times to Mallaig – his longest stay five years.

I dropped into the Heritage Centre in Mallaig, which shows a few of his works (nearly all his works were on large scale canvas) but feel it’s a shame more isn’t made of the fact that his life’s work centred around Mallaig. I wanted to buy a Schueler post-card, but no luck, they didn’t stock any. More reason to develop galleries and art centres in this beautiful area of the world

Here’s a small selection of his paintings. Beautiful work, and an inspiration…

“When I speak of nature, I speak of the sky, because the sky has become all of nature to me. But it is most particularly the brooding, storm-ridden sky over the Sound of Sleat in which I find the living image of past dreams, dreams which had emerged from memory and the swirl of paint. Here I can see the drama of nature charged and compressed. Lands form, seas disappear, worlds fragment, colors merge or give birth to burning shapes, mountain snows show emerald green. Or, for a long moment, life stops still when the gales pause and the sky clears after long days of careening sound and horizontal rain or snow.” 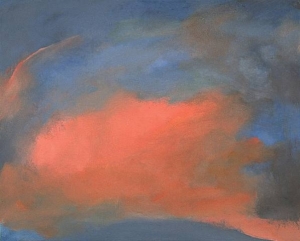 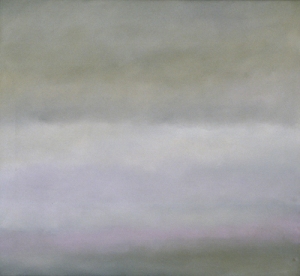 Some will be impressionistic, some more abstract. They’ll each be 5×5 inches (£45 each) and proceeds from the paintings will go towards a two year project which celebrates the landscape and community of Eigg.

To be included on the mailing list, simply email me at rose.strang@gmail.com with the title: ‘Small Eigg Paintings’ and each day I’ll email you the painting of the day.

You’re not obliged to buy, but I think it’ll be fun to view a new painting each day. If you do decide to buy I’ll post the painting out to you within a week.

The two year Eigg project will celebrate the beautiful landscape of Eigg, its creative culture and community.

It begins with a trip to Eigg starting this Saturday the 5th of April, when I’ll be staying in a bothy with this beautiful and inspiring view of the mountains of Rum Island… 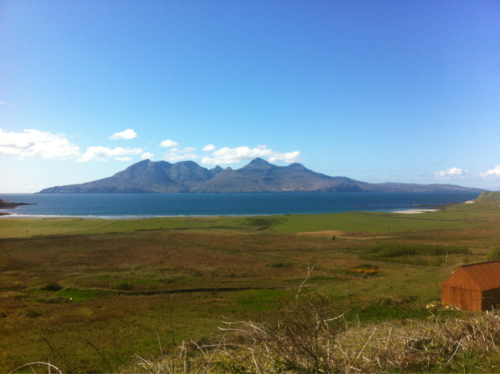 Part of the aim of this project is to tell the story of the Island of Eigg; From the struggle of the island’s inhabitants throughout Scotland’s changing history (and its near decimation as a community in past decades) to a celebration of its landscape and recent inspirational success as a community-bought island, which relies solely on renewable sources of fuel.

The resulting exhibitions for 2014 and 2015 in Edinburgh include Gallery Ten, The Whitespace Gallery and The Scottish Storytelling Centre where I’ll be exhibiting a range of paintings. The second and third exhibitions will include live performance with related art and archival images of Eigg, past and present.