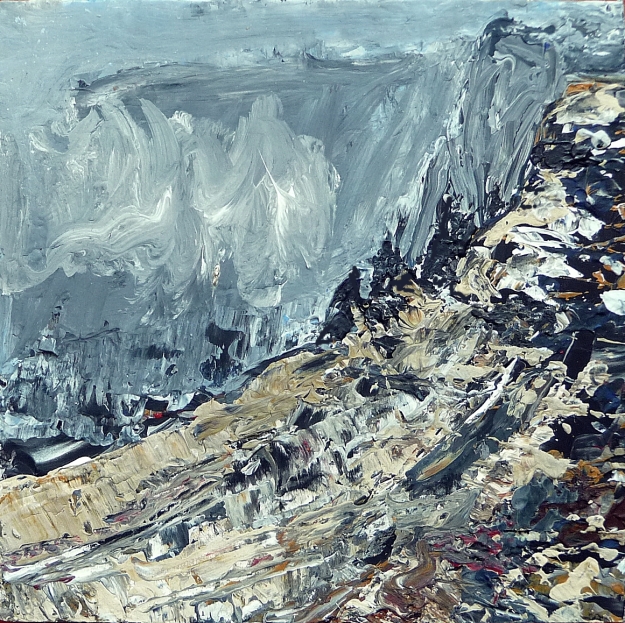 Today’s painting is a misty bird’s-eye view of Sgorr an Fharaidh (the cliffs at Cleadale); the setting for an atmospheric sculpture of Sweeney (or Suibhne in Gaelic) by artist Trevor Leat, which I discovered on a twilit evening amongst the rocks at the foot of the cliffs.

I was curious to know more about the stories and myths behind the character of Sweeney; described as a mad-man or bird-man, or denounced as mad then cursed and ostracised for his beliefs. I got in touch with Trevor, a former resident of Eigg, who now lives and works in Dumfriesshire, to ask about the background and inspiration to the sculpture…

Rose: Trevor, can you firstly tell me a little about your background as an artist and what you do?

Trevor: Well I trained as basketmaker years ago. Then began working on outdoor performance projects and theatre companies making large scale sculptures…often involving fire. This has continued to develop and my work now tends to be of more figurative creatures for private and public places

R: What’s the background to the Sweeney project and can you tell me how you became involved?

T: I lived on Eigg for 10 years so when the Bothy Project started up there I was invited to an artist in residence.

R: So who was Sweeney and what are the myths and stories about him?

T: Sweeney was an Irish king around 6/7thC who fell out with a Christian monk who was trying to convert his subjects. As a result a curse was placed on him and for seven years he wandered naked in Ireland and Britain, roosting in trees and becoming birdlike. It’s suggested that he came to Eigg at some point. He eventually died a sad death, perhaps stabbed by a jealous sword or antler . He chanted an epic poem during his madness which survives and has been translated and interpreted.

R: What does Sweeney represent to you, do you feel there’s a universal message in the myth or story?

T: I liked the image of the half bird, half man Sweeney. He was holding on to his pagan beliefs and this comes through in the tale of his wandering and the encounters he made on this journey.

R: What made you decide on the area at the foot of the cliffs in Cleadale?

T: Originally I planned to place him roosting in a tree but there aren’t many suitable on Eddie and Lucy’s croft. I climbed the hill at the back of the bothy to survey the possibilities and meanwhile sat the sculpture on the rocks there. He fitted perfectly on the stone there and it became his throne…fitting for a king!

R: Can you tell me a little about the process of making him?

T: Well, first I read up on the poem and got a feel for his tale. I made some sketches of him perching. There was a blackbird singing outside the bothy in the mornings and I decided a birds head would work for the sculpture. I welded up a simple steel rod armature and over this wove layers of peeled willow to give it form and movement . I had brought the willow with me and soaked it in the nearby burn to make it pliable. For the head I used some rough green willow to add a striking contrast to the naked white willow torso. Finally I sprayed the willow with linseed oil to give some protection from the Atlantic storms.

R: What response do you hope viewers have when encountering Sweeney?

T: Well one of surprise and curiosity I hope. The setting is spectacular with the cliffs in front of you and the peaks of Rum behind. I hope they will hear some bird song too.

R: How was your artist’s residency on Eigg, and how did it feel to be back?

T: It was a great couple of weeks for me on Eigg. I had come over early for an island wedding, so much socialising during the first week. Then the bothy became a retreat for me, a haven. The weather was wild at times, gentle on others and Sweeney grew. It is such an amazing place to visit and for me a great opportunity to re-visit and reconnect with the place that I left 24 years ago

R: Can you tell me about any upcoming projects and where can we can see more of your work?

T: I have several sculpture commissions for this summer. I will be making a ‘warhorse’ at Inverewe Garden, Poolewe, in June and on the Wickerman for the music festival in Kirkudbrightshire. I have sculptures at Falkland Palace, Scone Palace, Calagary Sculpture Trail on Mull, Craig Tara in Ayrshire.

You can find out more about Trevor’s work Here.

Below, an excerpt from Sweeney’s poem (as translated by James G. O’Keeffe  -The whole of Buile Suibhne can be read Here)..

I am Suibhne, noble leader, 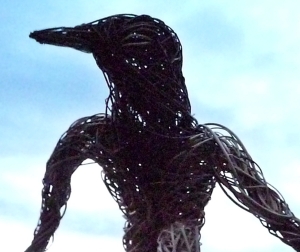 cold and joyless is my abode,
though I be to-night on wild peaks,
O woman who pluckest my watercress.

My mead is my cold water,
my kine are my cresses,
my friends are my trees,
though I am without mantle or smock.