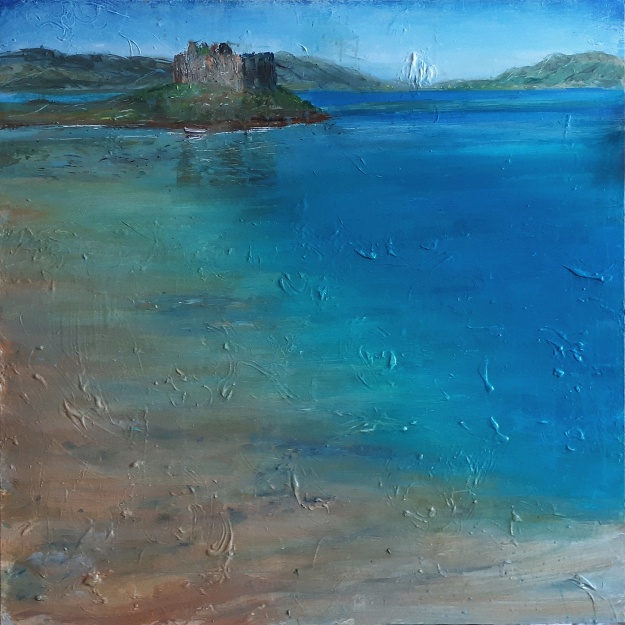 Today’s progress on ‘Jupiter’. I wanted to create a luminous backdrop for the painting – the sea is a glaze of blues and gloss varnish, which you can see slightly better in this image ..

As mentioned in a previous post, I decided to paint Castle Tioram as the theme for ‘Jupiter’. Jupiter rules the months of February and March and I’ll be including trees, flora and fauna related to the planet as the painting progresses.

I first visited Castle Tioram (pronounced ‘Cheerum’) in the Ardnamurchan Peninsula in 1992, and returned again for the first time since then in September last year. It was a beautiful, entrancing place back then, and still is. The Ardnamurchan Peninsula is one of Scotland’s most remote and un-spoiled areas of landscape. Ancient forests grow right down to the coast. Mosses, lichens and rare plants flourish in the relatively unpolluted atmosphere – the forest’s ecosystem is more or less untouched, save for a very few pathways and single track roads that weave through the area.

If you’re interested in forest ecosystems you’ll know that forest trees ‘talk’ to one-another in a sense. ( https://en.wikipedia.org/wiki/Suzanne_Simard) .They communicate via their complex root system, so that younger trees, or weaker trees are fed nutrients by older trees – they’re interdependent. Before a tree dies, it sends nutrients to the roots of nearby trees. When the forest root-system is disturbed by, for example, motorways cutting one area off from another, the forest ecosystem is destroyed. An ancient forest is a sort of entity in a sense (or a community if you like)

So Tolkien wasn’t far wrong, and C.S. Lewis (a close friend of Tolkien for decades) shared this reverence for nature – both author’s books featured the idea of conscious trees. Lewis’s stories featured dryads (tree spirits) able to ‘leave’ the physical tree and travel far distances to communicate important news. (in The Last Battle for example a dryad tells King Rillian that her tree, miles away, is being destroyed along with the rest of the forest).

In the east part of Ardnamurchan, further inland, is one of Europe’s rare original oak forests. It’s called Ariundle (derived from Scottish Gaelic Àiridh –  meaning a shieling or collection of small huts and Fhionndail – a fair meadow). So, ‘a collection of huts in the fair meadow’. Ariundle is a remnant of the ancient coastal oakwood that formerly stretched along the Atlantic coast from Spain and Portugal to Norway.

In early medieval times Castle Tioram and Ardnamurchan were far busier places than nowadays. The highways of the ancient world across Scandinavia and the north of Scotland were sea-routes – quicker to navigate than land before modern times when roads were cut through mountains and forests.

The north and west of Scotland as a whole was teeming with activity. There were numerous wars of independence and during the Middle ages, Scottish castles were often burned and destroyed during war-times to prevent them being occupied by incoming armies (which is what happened to Castle Tioram).

Towards the end of the 18th century (post-Culloden) Highland clearances, then the industrial revolution almost entirely emptied some areas of the west coast. Anyone who hadn’t emigrated, or been forced to emigrate, to America and Canada moved to the cities and towns for work.

The one upside of this is that the landscape has been left untouched. Castle Tioram, situated on a rocky outcrop in a glass-like sea surrounded by wild forest, can have quite an impact on visitors to the place –  it does look almost other-worldy, or mythical.

Maybe it’s just nostalgia that makes people respond with emotion to the castle, a sentiment or belief that things were better in times past. Looking into early Scottish history though, there are as always two stories – one from ruling leaders, post war, and the story discovered in ancient Gaelic manuscripts. Tioram was never defeated in battle, for hundreds of years it was relatively peaceable (for those times at least, when feuds were common throughout Europe).

The castle and surrounding area was home to a large community ruled by the MacDonalds under the complex laws of the early clan system. This society enjoyed thriving art, literary and music traditions, and although the more democratic approach to running society appeared chaotic or ‘barbaric’ to outsiders, it now looks ahead of its time. Men and women inherited title and property, children of the ruling monarchs were often placed in the poorest households of the clan, while poorer children in the community were adopted temporarily by the ruling family. This encouraged connections, the learning of skills, and a balanced community.

It wasn’t all peaceable of course, there were the numerous complex feuds between clans, and the wars of independence which occurred between the 13th to 18th centuries. In 1715 the then chief of Clan Donald, Allan MacDonald, torched the castle before joining the battle at Sherriffmuir (1715 Jacobite rebellion – thanks for correction Murdo MacDonald!) He expected to lose, and didn’t want the castle to fall in to government hands. The final battle took place in 1745 at Culloden, and after this the Scottish clan system was destroyed (also due to the fact that many Scottish clan chiefs bought into the new feudal system as it offered unlimited opportunities for wealth and land) and Scotland never regained independence.

All of that explains some of the historical reasons why we respond to such places, but maybe our response to castle ruins in a wild remote landscape is also related to the power of fairy tale or archetypes – it ‘speaks’ to us of something important and valuable. In Ardnamurchan the air feels different because it is different – it’s clean, scented with salty brine, sun-warmed wood, mossy forest floors and the honey of heather throughout summer – it feels idyllic. Nowadays we understand the environmental fragility of such places.

In an earlier post I described C.S. Lewis’s fascination with Medieval mythology and cosmology – an era in which he believed imagination held an important philosophical role. From a different perspective Jung also explored this area – focusing on the importance of archetypes in the collective human psyche. Early Medieval thinking hadn’t yet lost that sense of universality, and connection to nature.

A castle on a remote island reminds us of a thousand different myths and fairy tales – tangled forests, ogres, battles, knights, magicians, princesses plotting escape, not to mention Camelot – a legend based on dreams of a lost golden age and the search for a mysterious holy grail. One conflict of the story is the battle of Pagan and Christian religions – neither of which comes out on top, interestingly. The myth goes (of course!) that both Merlin (Pagan) and Arthur (Christian) will return again.

It all reminds me of this sort of art …

This Gothic or pre-renaissance style of painting is a continuation of Byzantine art. It made way for new ideas of realism in art – perspective and so on – leading to high renaissance art and ‘the age of reason’. Boticelli was sn artistic bridge between these styles and Northern renaissance art sometimes referred back to this earlier era stylistically.

All of this is ideal subject matter for my Jupiter painting, relating also to the Jupiterian book from the Narnia Chronicles The Lion the Witch and the Wardrobe which centres on the idea of Winter passed, guilt forgiven – restoration of a golden age of peace in the sea-side castle of Cair Paravel after years of cold and brutality, but this comes after challenges, sacrifice and re-birth (the Christian element of the story – though there are many themes).

In this story, the dryads and trees of Narnia are still fully alive (in later books they have to be re-awakened) and since the oak is the tree most closely associated with Jupiter, that’s another reason to paint Ardnamurchan, one of the few places where you can enjoy fully living forests.

Here’s a link with more about Ariundle – https://www.wildlochaber.com/ardnamurchan/wildlife/ariundle-oakwood