This page features other visual arts projects and works that are not landscape-art related.

(Also view ‘Collaborations/Videos’ in the menu above, which features my video projects and collaborations with other artists)

This guy’s not for burning

Traquair House, Scotland 2018. Created at the invitation of the Demarco Gallery and Traquair House to commemorate the history of Traquair House. This piece was created by drawing with invisible ink which can only by seen with a UV light. During the Scottish wars of independence, Jacobites who fought for restoration of the Catholic Stuart throne and an independent Scotland often had to go undercover due to persecution of both Catholics and Jacobites at the time. One of the secret motifs, recognisable to fellow Jacobites, was a rose which formed the letters C.S. (Charles Stuart – aka Bonnie Prince Charlie).

The rose referred to  the common white rose of Scotland, which was also adapted as a Jacobite motif. Traquair House has always been Catholic and holds an annual celebration of Guy Fawkes, the house also sheltered Catholics during a time when their lives were in danger.

While I don’t personally belong to any religious organisation, I found the history fascinating and very much enjoyed creating the piece of 21st century subterfuge below! 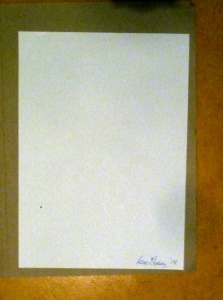 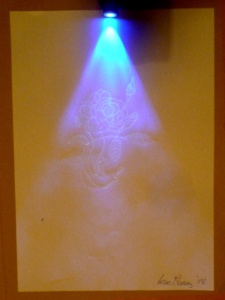 A portrait of Richard Demarco, created for the Demarco Archives in 2017.

In 2017 I decided to paint a portrait of Richard Demarco.  It was an enjoyable challenge as I’ve known Richard Demarco since 1999 and found his work and life an inspiration.

A straightforward portrait or reasonable likeness could have been completed in a few days, but the challenge for me was how to encapsulate the ideas, experiences and artistic references. Everything from the concept of the Road to Meikle Seggie and the artists Richard has collaborated with over the decades, most notably Beuys, Abramovic, Kantor and Neagu. Most importantly, Demarco’s belief that the role of the artist is to witness and communicate truth, that art might open dialogue and therefore has potential to heal the trauma of war.

The backdrop of the portrait is a wood panel painted with blackboard paint, the portrait itself is painted free-hand with gesso, on Richard’s left is a rough copy of Beuy’s drawing of a stag, its antlers reach up to the pencil drawing of three telegraph poles representing the road to Meikle Seggie.

While making this portrait, I considered Richard Demarco’s role in creating artistic dialogue between war-torn countries, and the fact that both he and Joseph Beuys sought a creative approach that crossed boundaries and promoted healing in post-war Europe. Before I completed the portrait Richard had experienced a stroke, and I was hugely relieved that he recovered well. I hope this portrait expresses friendship and renewal of faith during dark times. 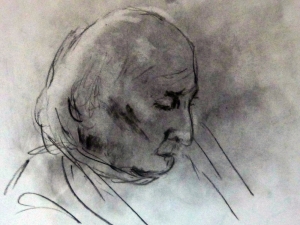 This 3D piece was created as part of the Canalscapes exhibition organised by the Demarco Foundation in 2000. Edinburgh Quay was being developed and I decided to explore the idea of containment of water and something about our human response to water since I’ve always found resevoirs and dams unsettling!

On the left (in the lighter water section) I pasted acetate on which I’d printed copies of canal architect’s plans. On the right darker water chamber there’s a small quote at the bottom from Shakespeare’s Tempest; Now would I give a thousand furlongs of sea for an acre of barren ground: long heath, brown furze, anything. The wills above be done, but I would fain die a dry death.

The green tubes suggests a flow between the two, also spirit in the from of a fish.