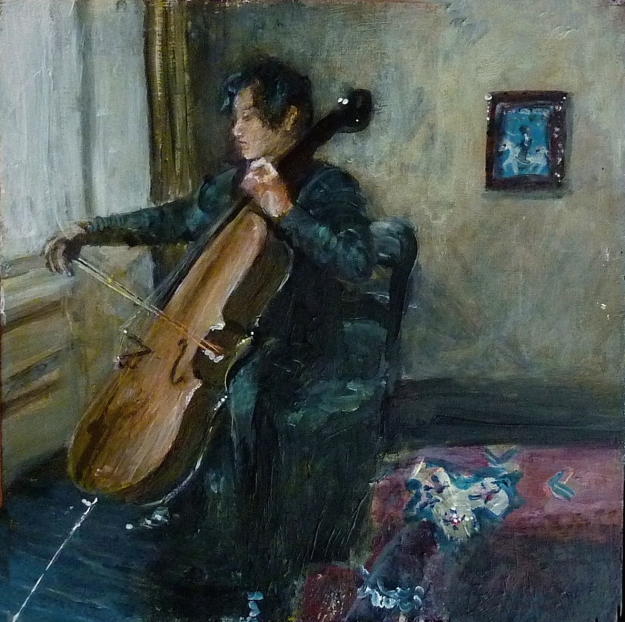 Above – the last painting for the Winter Series, which launches this Saturday with the Private view, followed by open studio days from Sunday 26th November to 3rd December.

All of the paintings are now viewable in ‘Artworks’ from the menu above. Sombre Constellations has sold, ‘Red Velvet Dancing’ has a few buyers interested but none confirmed as yet, so do email if you have any enquiries about the paintings, at rose.strang@gmail.com

It’s so satisfying (and a relief I must say!) to have finished this series. I saved the painting above, which features Atzi playing cello, last because it was in a way the most straightforward painting of the series.

It’s called ‘Baroque’ which was a very literal title and response to the piece of music by Atzi, which was very … Baroque! So in keeping with the theme, I decided to follow a traditional painting process that would have been followed by painters of the 17th century.

Some photos below for those interested in process and techniques…

I was looking at Vermeer in particular, and while I’m not using oil paints, or the mediums he would have used, I can at least use a similar process of a painted sketch onto neutral ground, building up the painting in tones, then applying glazes of translucent colour.

I finished with some impasto highlights (when paint is applied thickly so it stands up from the surface as oppsed to being flat).

I’d need a lifetime to paint like Vermeer, obviously! But still, I found the process interesting. I lack the patience for that amount of detail though, you can see my paint application on the Turkish carpet was quite sloppy! I focussed more on Atzi’s features and facial expression (very tricky) and the cello.

Lastly here’s one of Vermeer’s paintings The Music Lesson, and a detail …