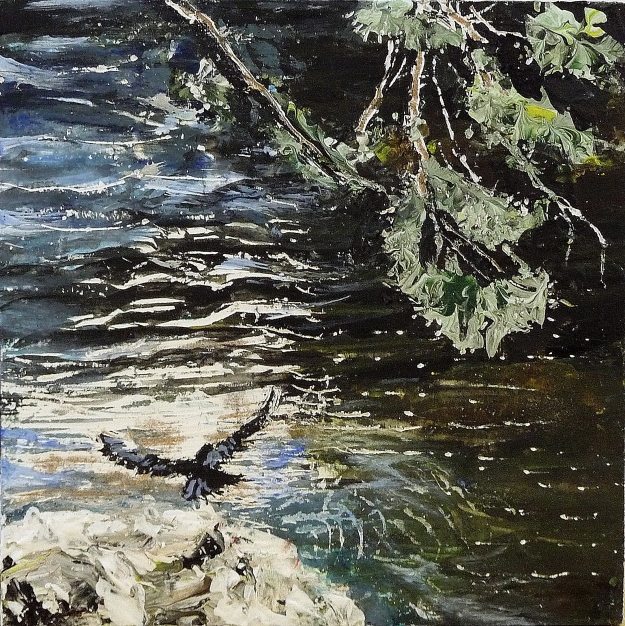 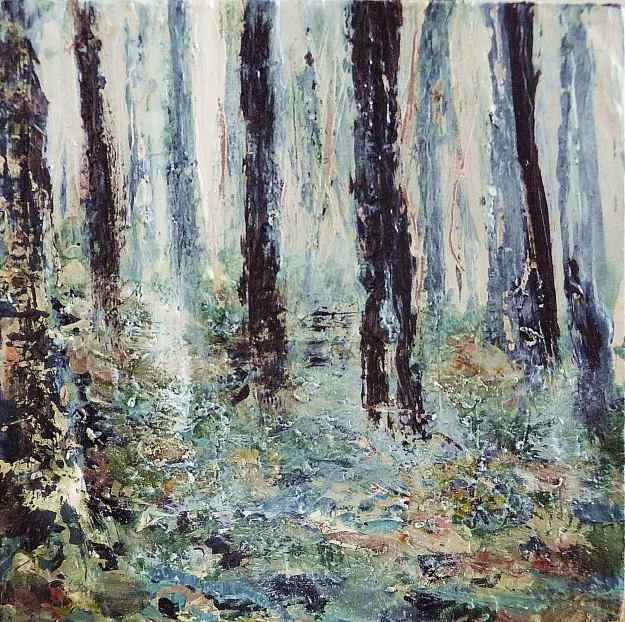 Today’s paintings – a hawk swooping down to the River Tweed, and mist through the trees in the Forest of Glentress.

I’m nearly at the end of George Fraser’s ‘The Steel Bonnets’ – a book about the history of the Borders Reivers. It’s been harrowing reading.

The first chapters cover the lifestyle of the Borders Reivers and the final chapters deal with the wars during Henry the VIII’s time when devasating wars wrecked the lives of people in the Borders and beyond.

Accounts of the Reiver families have been difficult reading in themselves, never mind the later descriptions of  war. The Reiver’s life was one of constant feuding, raiding and violent conflict, across both sides of the Border. This was partly due to previous wars which wrecked the landscape and therefore the livelihood of Borders familes, but also it simply became a way of life, and despite authorities on both sides of the border appointing Wardens to try to calm the conflicts, the chaotic lifestyle became entrenched. (The Wardens themselves often became Reivers!)

It was lucrative too, and for those who’d perfected their Reiver skills it led to the accumulation of vast wealth; some of the titled landowners, whose estates line the Borders today, are their descendants.

The status of each Borders family or clan was diverse though, and within for example the Kerr family there would be everything from titled land owners in huge castles with an army of thousands, to people living in broken down hovels.

For the battle hardened Borders Reivers, violence and war were normal, they were described as ‘scared of nothing’ and their outstanding skills in warfare were utilised by Kings on both sides. Also the feuds between Borders families were manipulated to form allegiances. Scottish fought on the English side, sometimes changing tactics mid-battle if that seemed a better plan.

While reading ‘Steel Bonnets’ it was thinking about ordinary Borders people that I found harowing. Fraser describes a widower with her children burned in their peel tower, the starvation of countless thousands of poor people because of the wrecked landscape. They’d plough fields during the night to avoid attack, but after ten years of war it must have been a bitter, miserable struggle. Also he describes, very briefly, the group of monks who held out bravely in Kelso Abbey during attack by Henry VIII’s army, but didn’t survive.

When I visited Kelso last weekend the ground was festooned with forget-me-nots, which seemed to me as symbolic as poppies; in rememberance of the ordinary people who never sought war and conflict.

Woven throughout the stories and Borders ballads though, references to hills, rivers and ‘forestes greene’ bring to my mind the image of a rich, medieval tapestry, and suggests the presence of faith and love of familiar landscape amidst war and fear. One Borders ballad titled Erlington made me smile, amidst all the grimness! The last line of this ballad inspires the title of my upcoming exhibition The green woods free