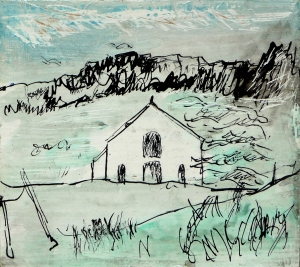 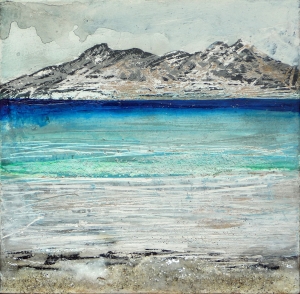 Two paintings in ink – a church in Cleadale and Laig Bay with the mountains of Rum.

The sea has always been a huge inspiration for music and song around the world – symbolic as it is of connections, arriving and leave-taking, danger and sustenance. I’ve always enjoyed hearing Gaelic songs about the sea because to me the sound of Gaelic has an elemental quality that’s enhanced through song.

As mentioned in yesterday’s Eigg blog my trip to Eigg happened to coincide with a re-creation of geologist Hugh Miller’s trip around the isles on a ship called the Betsey. The crew on the recreated version includes geologists, artists, scientists and musicians, who decided to hold a traditional ceilidh last Tuesday at the Glebe Barn on Eigg (a yoga retreat situated near the Pier Bay). I went along to listen to poetry readings by founder of the Scottish Centre of Geopoetics  Norman Bissell and story-telling by the wonderful Essie Stewart. I also enjoyed a beautiful rendition of a Gaelic song about seals by Kate Langhorne; a 25 year old graduate of Anthropology and Gaelic studies from Glasgow.

All this under Tuesday’s beautiful full moon! Luckily, despite several glasses of wine, I had the sense to record both the song and the moonlight! (Kate has promised to send the lyrics for the song on her return to Glasgow):

A curious seal spotted on the north coast of Eigg..

And I defy anyone not to feel awestruck by the sight of a real, live Minke Whale emerging from the deep sea. This was on my return ferry journey. Absolutely stunning. The ferry stopped so we could all watch the whale, meaning I caught my train with just seconds to spare, absolutely worth the hectic rush! 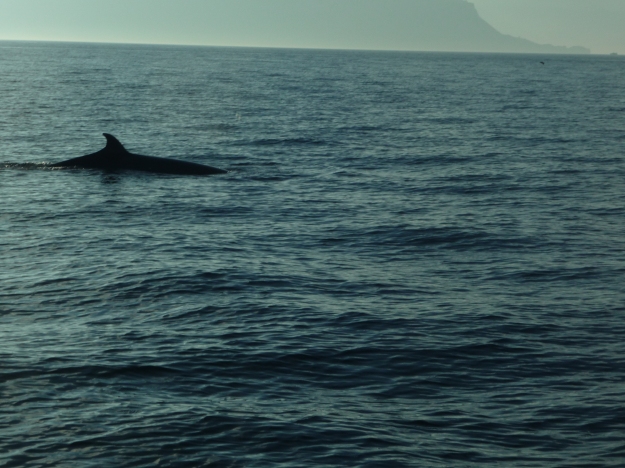