This new year I visited Port Soy on the north coast of Aberdeenshire where I watched fireworks then constellations in a crystal clear, black and unpolluted sky.

I found it inspiring, the images I experienced stayed with me and so I’ve been exploring the work of artists whose ideas express a response to infinite skies. The notion of endless space is compelling and I remember when the existence of infinity first interested me as a child when reading the mysterious chapter in George MacDonald’s ‘The Princess and the Goblin’, where during Irene’s bath she looks up to see that the walls have disappeared and there’s an endless night sky. Very unsettling, yet beautiful. MacDonald was inspired by the Jansenists (German Romanticists) and sought to express these ideas in literary form through children’s books.

During my arts degree I returned to these ideas through study of concepts of the sublime, from Burke and Kant to Paul Crowther – the notion that when presented with a experience that goes beyond our understanding we’re faced with the limits of human perception, which can have profund effect.

I’ll be working on a new series of paintings titled ‘Nocturne’ and I’ve been exploring a small series of works by artists which express some of these ideas, some in a more visceral sense, purely through colour and form, others in subject matter.

The paintings above and right by Vija Celmins were created as part of series depicting space, stars and night sky. It’s a  repetitive series with very subtle differences between each version, later she began to develop the subtle cobweb effects.

Her work was photo realist though always minimal, elemental and monochrome. Reading about her life and work as an artist, I wonder if her sense of rootlessness – or of not belonging, contrasting with her need for freedom, had a lot to do with her fascination for endless space.

There are no horizons, no exactpoints to anchor the paintings, though she begins to suggest subtle connections with the web-like lines, which also recall constellations, and the patterns or connections we create to make sense of life. These themes echo a conflict that’s often experienced by artists, or people whose lives are lived through creativity. 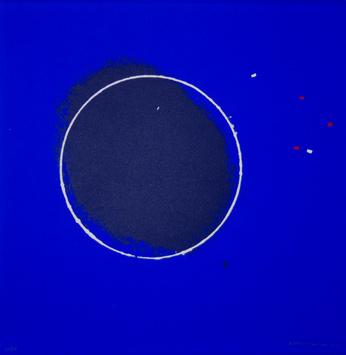 The painting above is one of my favourites by Wilhelmina Barns-Graham. She lived part of her life in a family house outside St Andrews on the east coast of Scotland. I stayed overnight some years ago (she was no longer alive by that time, so artists and writers had been invited to explore her work as part of residencies and I was there to visit a writer friend in residence at the time). I’d spent the day gazing at her paintings, and later walking along the beach in the evening, I saw her vision in the simple, beautiful forms of rocks and moon against those huge northeast skies.

This work by Andrew Melville from the 19th century is in total contrast with the abstract works above, but it’s the quality of blue I find compelling, it has a visceral effect on me that has something to do with the depth it captures, perhaps the desire to travel and explore – as expressed in the idea of orientalism from a western perspective maybe. He contrasts the warmth of lantern-lit brickwork and sky perfectly – our eyes are naturally drawn to the velvety depth of twilit sky. 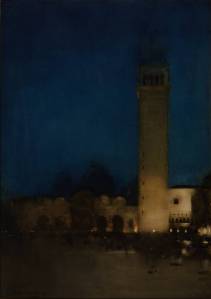 In this dreamlike work below by Yee Jan Bao the horizon appears as a hair’s breadth, or a  tightrope, traversed by a ship surrounded by endless blue. the effect is cold, unsettling and at the same time compelling; we’re drawn to this sense of space and the unknown while simultaneously fearing it..

I’ll be posting photos of my own painting forays into these themes over the next few months. In the meantime, here’s wishing everyone a wonderful happy new year.