Below, some details from the painting … 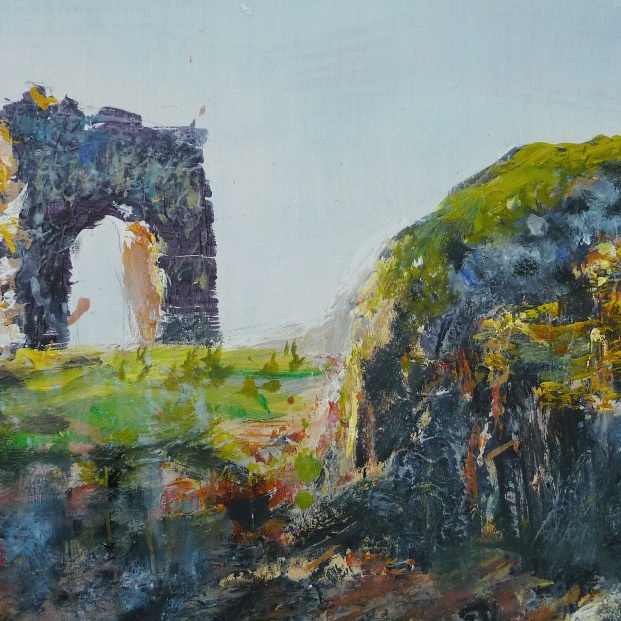 This latest private painting commission is of Ruby Bay in Fife, on the east coast of Scotland. It’s so-called because if you sift through the small pebbles in the bay you can find tiny little garnets, not rubies as such but very like them!

Ruby Bay is on the Fife coastal path, near Elie Bay. It’s a beautiful stretch of coast-  the most famous beach on that stretch being St Andrews (of Chariots of Fire fame). The tower, built in 1779, is called Lady’s Tower as it was used by Lady Janet Anstruther (Janet Fall) as a bathing tower – a rich person’s beach hut if you like!

I wanted to capture the classic cool tones of an east coast sunrise – clear, cool and only slightly hazy. Looking at this painting in real life (it’s bigger than it seems form the photo at thirty six by thirty six inches) you sense movement from a calm tide about to recede from its high point. The lilac tones of pre-dawn are just about disappearing, replaced by clear turquoise. Lemon-yellow sunlight is just kissing the tips of the rocks, tower and grass.

The painting took about six days. It was started with gesso to lay down composition and background texture, then acrylics to get contrasts, the acid tones of lichen and the built up layers of rough-textured rock. Lastly I used oils for the sea and sky, and the cool light blue in the shadows.

It’s been a pleasure to paint  – complicated and with varying textures, but I think I’ve captured the calm and the pure light of sunrise in the east. I’m quite keen now to have another go on smaller wood panel to create a more abstract version.

The photos below show most stages of the painting … 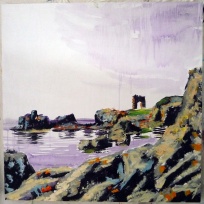 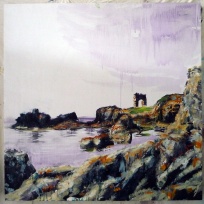 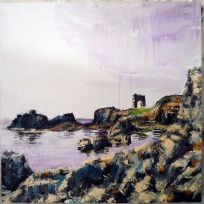 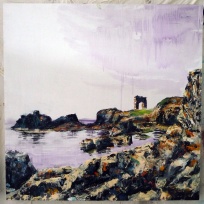 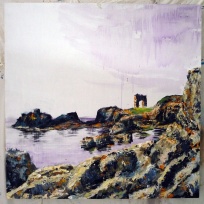 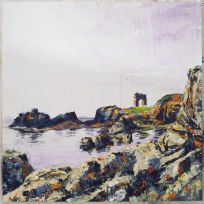 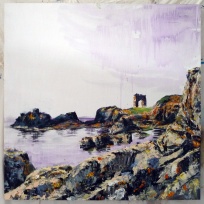 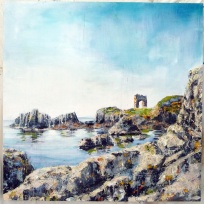