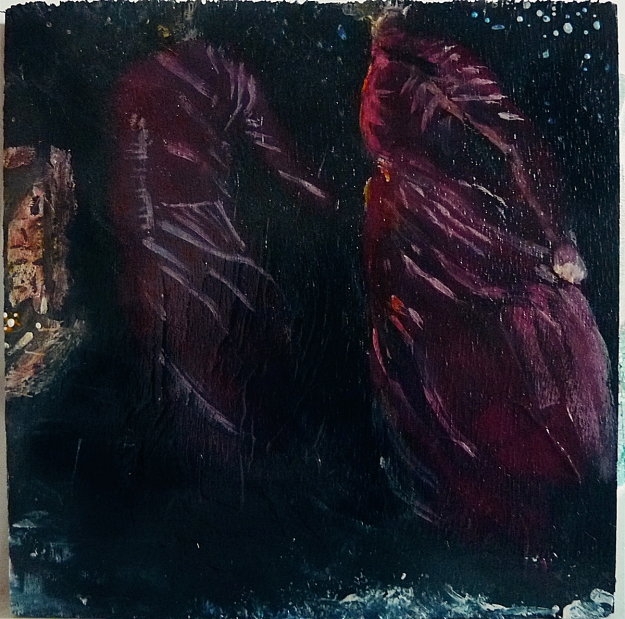 A definite feeling of progress at last …

Above are the latest pieces for the upcoming Winter Series exhibition (info Here) which is opens in just 9 days!

As mentioned in a previous post, the challenge of this series is that I’m trying something new; responding to twelve two-minute pieces created for this project by composer and cellist Atzi Muramatsu, but also I’m finding it a challenge because each piece of music is entirely distinct, so with each painting I’m exploring a new theme as opposed to variations on one subject.

With nine days to go, and half the works finished, I’m finally getting into the swing of things. It was particularly enjoyable to paint the figure dancing in red velvet by firelight, this one ‘painted itself’ as they say. That’s partly because I took photos of myself in a red velvet dress for reference. That’s much easier because the proces is mimetic. The first thing you learn as an artist is to copy. It’s much more challenging to create something abstract and from imagination.

A couple of photos the painting in progress (I might take out the smaller figure, or make it recede a bit more).

‘Winter 1’, in response to the first piece of music, was quite difficult. The music itself felt like a meandering descent, and at the same time very cold with a sense of space. I  tried several epic-style paintings looking from a height down to a frozen valley but they just didn’t work. This descending waterfall, which leads the eye down to a ship frozen in ice, seems to fit the mood.

The running snow hare was the immediate image that sprung to mind when listening to one of the  pieces where the cello style is speedy, scratchy, scittering and staccato (to use a musical term!) also springing, just to add another word starting with ‘s’.

Below is the ground-work for a portrait of Atzi playing cello, in response to a Baroque-style cello piece. This monochrome sketch onto grey ground is a very traditional approach – I wanted to try a traditional technique so it feels in keeping with the 17th century music style. I’ll gradually build up more complex tones, then overlay with colour glazes, followed by some impasto highlights.

I feel I’ve earned a short break now, so I’ll spend the rest of the day relaxing before the Edinburgh Art Fair preview which launches this evening. I have four works in the show, hosted by the Limetree Gallery (at Stand D11). All info Here