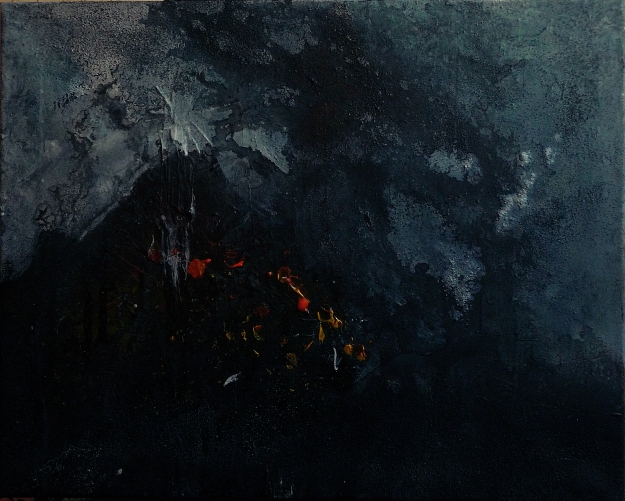 Today’s painting was part inspired by fireworks at new year, but then developed after seeing a video of the eruption of Sakurajima volcano in Japan.

A few months ago I spent a few weeks filling in funding applications for a creative residency in Japan with composer Atzi Muramatsu. We had no luck though, which is mostly the case for artist’s applications for public funding – the competition is intense at the best of times – particularly at the moment.

Anyway, Atzi sent a video showing a recent eruption on Sakurajima that we’d have seen had we been there. Ah well, I can paint it! The interesting thing is that the composiiton I’d made of fireworks at new year looked so similar to the erupting volcano. This was the original sketch/painting (below)

I added watery gesso, black pigment and salt then baked it in the oven for half an hour. I’m really enjoying working with black pigment, actually dylon powdered dye for clothes – an excellent idea suggested by my friend Donald when I described the texture I was looking for and depth of black/blue. Here’s a close-up showing the grainy/inky effect..