Above: A sketch from Rannoch Moor, going in to Glencoe. Rose Strang 2018

As I’m currently painting a private commission which must remain secret until October 2021, I thought I’d post themed blogs in the meantime. Today’s theme is Mountains (paintings below)

My last themes were Sea and Trees. In the next few weeks I’ll  share my paintings of portraits, winter, abstraction, imagination and collaborations

There’s going through mountains and there’s going up them – the former being infinitely more relaxing, though less rewarding! I’ve climbed quite a few in my time, the largest being Tom na Gruagaich, part of Beinn Alligin in Torridon, Scotland.

That was with my partner at the time, who’d learned to navigate with map and compass. To wander into mountains without that knowledge is a dance with death. To give an example, Scottish Mountain Rescue (SMR) reported 13 mountain deaths in 2013. Happily that number is falling thanks to the SMR. Those 13 people were probably wrapped up for the cold and had a map and compass, but simply made some fatal mistakes.

It was probably summer when I climbed Tom na Gruagaich. I remember the fear I felt as we approached the valley, it seemed too vast, not a place for humans to wander. The climb was so arduous (and I was very fit at the time) that I felt I’d disovered entirely new muscles – every part of my being was tired as we approached the top.

It was a plateau covered in mossy ground, soft and perfect for flopping down for a rest. I pulled myself to the edge of the yawning chasm  – a sort of scoured out bowl of cliffs about 3000 feet in height- and gradually realised that a tiny dot moving slowly on the opposite side was a person climbing the cliffs. The land stretched infinitely – the form of bulky, dark mountains huge with snowy tops in all directions.

I took photos but even a wide-angled lens didn’t capture the feeling of epic space. Though it was summer, it wasn’t a place you’d want to linger for too long. Walking back down was a return to gentleness – the sound of streams and birds, the lushness of trees, plants, warm air and safety.

Living in mountains such as these created the tough race of Scottish Highlanders, now scattered around the world – there are now more everywhere else than in Scotland! Even living in the lower Highland valleys requires an ability to survive in conditions most would find intolerable at times – soaked through and snowed in, difficult to get anywhere in winter, but the mountains are so beautiful they can feel like a romantic paradise in spring and summer.

To accompany the following paintings of mountains, here’s Rachel Walker singing Bràighe Loch Iall (Hills of Loch Eil) in Scottish Gaelic – a loch I know well as it’s on the road to Glenfinnan and the west coast. Her song captures the yearning for home that many of these songs do.

These sketches are easily made, as I sit in the passenger seat of a car! Good practice for sharpening the eye and seeing the essentials. These first ones are going through Glencoe. The paintings of Kintail and a road in the Isle of Harris, were made later in the studio. It’s endlessly entertaining driving through these dramatic mountains! 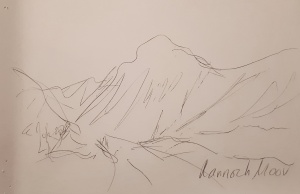 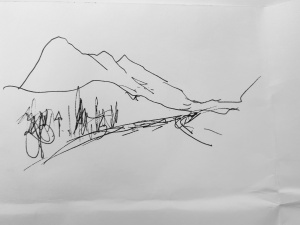 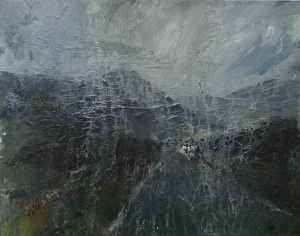 The two odd ones out in the collection below, are the Casares paintings. These are of the mountain village of Casares in the south of Spain. I took a trip into the mountains and was deluged by a sudden rain storm, which made me feel quite at home in terms of painting inspiration. The rest are of mountains in Scotland, with their earthy colours and gritty texture.

Strictly speaking the cliffs of Cleadale on the Isle of Eigg aren’t mountains, but they are suitably dramatic. 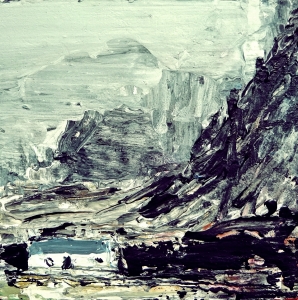 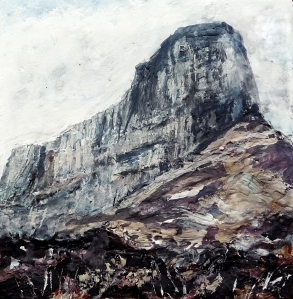 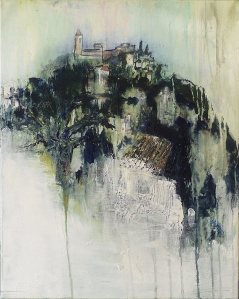 I’ve climbed two mountains in the snow. It’s not to be taken lightly. Climbing up Ben Vorlich, a snow blizzard blew up just before we were about to climb up to the plateau and summit, so we waited for it to blow out at the bottom of a cliff, I couldn’t see a thing beyond a foot. Another time, coming down snowy Schehallion in Perthshire, the sun was shining in a dazzling blue sky and I sledged down on my front on a piece of plastic!

Except for Beinn Odhar Bheag below, which I sketched while in Glenfinnan (then painted later in studio) the rest are snowy mountain-scapes of the imagination. 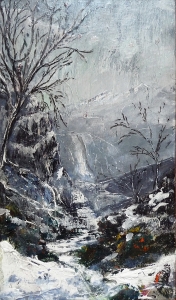 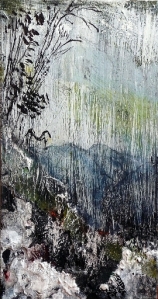 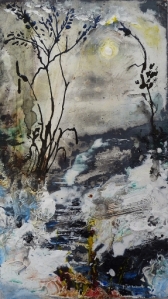 In a few days I’ll post some figurative paintings – portaits and animals.