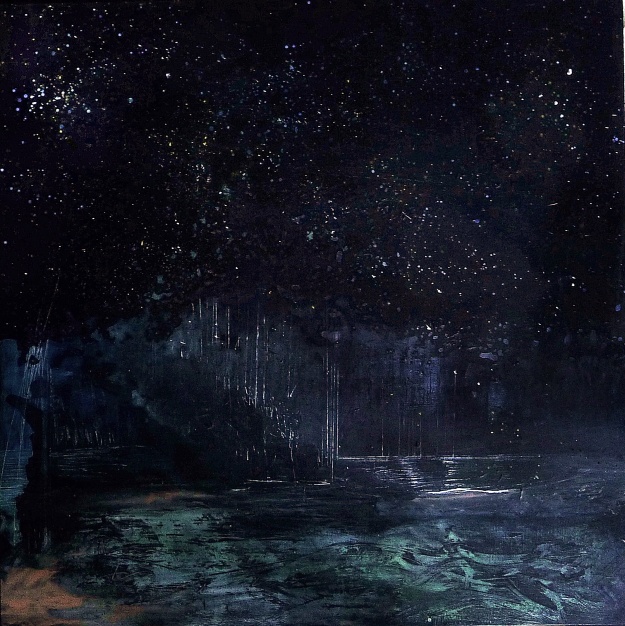 This painting is part of my ‘planets series’, inspired by ‘the Narniad’ and the Medieval view of the cosmos, which you can read about in these previous posts – 1  2, 3 and 4

I think the painting is pretty much there now, which is a relief. I wanted to have it finished by the end of this month since this painting relates to the planet Saturn –  connected to December and January. A bit more detail maybe (I might pick out the constellations of Capricorn and Aquarius in very fine lines) then a couple of layers of varnish will give it a rich, glossy finish.

I feel it’s suitably Saturnine, without being too oppressive, and maybe there’s also a subtly medieval atmosphere. I think the finely scratched lines bring metal-plate etchings to mind anyway.

Here are a few photos showing its development … 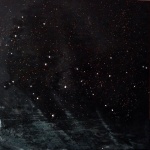 I’m not only relieved about this painting nearing completion, I’m also glad that January is on its way out as I find it an oppressive time here in the northern hemisphere. The next planet in focus is Jupiter which rules Pisces and Sagittarius. (Medieval astronomers were limited in what they could see , so Pluto, Neptune and Uranus had not yet been named as planets, hence why nowadays Pisces is said to be ruled by Neptune).

Just to confuse matters further, there’s Sidereal astrology (Indian Vedic approach, and some western astrologers use it) and Tropical astrology. Tropical astrology uses a constellation map from around 2000 years ago, but due to the earth’s wobble this is now about 30 degrees out.

If this interests you, I recommend the Skymap mobile app, which shows you the exact position of the stars and planets in real time. You can also search by date going back or forwards in time. I’m a Sagittarius going by the Tropical system, but according to Sidereal astrology I’d be born with the sun in Scorpius (in real time/our time the sun is in Scorpio from the 23rd to 29th November). But, the old-school Tropical system splits all the zodiac constellations into equal segments of the night sky so each is given approximately 30 days.

Make of all that what you will! I’m no expert and I have no idea if planets can actually influence our birth and personality. I am interested in the moon though, which does influence the earth.

The next planet in my series is Jupiter – the medieval planet associated with learning, theology, philosophy and joviality, which governs Sagittarius (centaur) and Pisces (fish). Its associated colours are greens, blues, aqua, silver, purple and blue, its animals horses and fishes, also dolphins – I find these subjects and colours very appealing ! I’ll begin the new painting next week.

I’ll leave this series of posts about Saturn with a suitably profound, mysterious and decidedly eery video (below) by (Capricornian) David Bowie from his last album Black Star (which is in fact an alternate name for Saturn) .

The video and song are laden with symbology and hidden meaning (there are thousands of Bowie fans out there busily attempting to decipher all of this. Good luck to them, ha!) Remember though, that among the themes of Saturn are death, renewal and liberation, giving way to the influence of Jove, Jupiter and happier days! The Narnia book relating to Jupiter is The Lion the Witch and the Wardrobe – the end of long winter and the coming of Spring.

A quick sketch, made in biro this very minute ..

Flower illustration, copied from sketch by Pauline Baynes from the Narnia Chronicles.