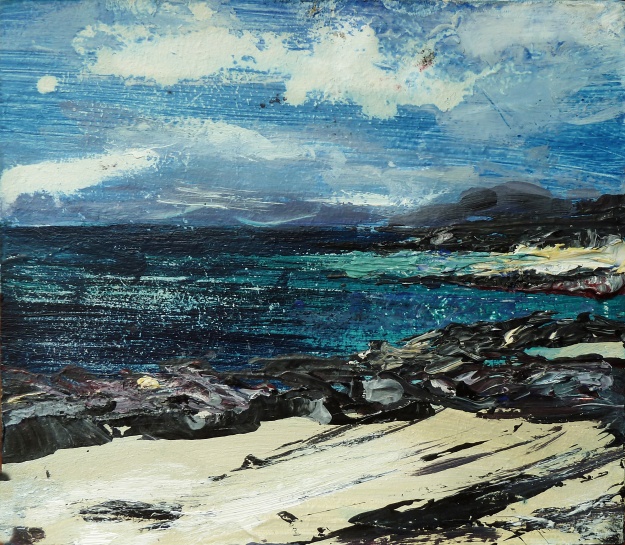 Today’s paintings of the luminous Na Buirgh beach on the west coast of Harris.

I’ve decided to go with the Gaelic place names for most of this series, mostly because it reflects the history of the island. Many of these are Gaelicised Norse due to Norse settlers and rulers in Hebridean history.

I can’t speak Gaelic, though I know quite a few words (mostly through singing Gaelic songs and travelling through the west coast where the sign posts are in English and Gaelic). Opinion is divided on maintainance of Gaelic place names, since it costs double the money (same in Wales) but most feel it’s an essential way of keeping a language therefore a history, alive.

There’s a lot of history surrounding survival of the Gaelic language. Since I’m not a historian I can’t do the whole subject justice here (and anyway this is an arts blog with occasional forays into other subjects) but to give a brief picture – the dropping numbers of Gaelic speakers in recent history has much to do with compulsory English taught in schools throughout the UK, but it goes back much farther than that, to the aftermath of the Jacobite wars.

It’s a history well worth exploring if you’re not familiar with it, basically Gaelic and Highland culture in general was suppressed after the final Jacobite rebellion at Culloden. Tartan was banned of course  – much later revived when Queen Victoria, much influenced by the romanticised Highland history as written by Sir Walter Scott, decided to build Balmoral and encourage the wearing of tartan and general symbols of Highland culture in general.

There is a very dark irony around that of course, since many of the more violent aspects of the destruction of Highland culture and society after 1745, in addition to the later Highland clearances, amounted to ethnic cleansing.

Written Gaelic looks unwieldy if you don’t know how to pronounce it, but hearing it spoken or sung is a different matter. Here’s acclaimed Gaelic singer Rachel Walker singing Braighe loch lall. (Braes of Locheil). If you’re interested in the translation I’ve included original Gaelic and translation below..