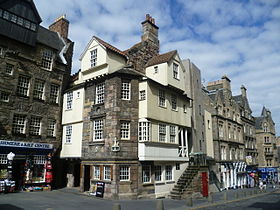 The photo on the left is of the Scottish Storytelling Centre in the heart of Edinburgh’s Old Town on the Royal Mile, where the Eigg Island exhibition and event will be held in March.

It’s on the site of John Knox’s house which is Edinburgh’s only completely original medieval building, dating from 1470.

The event includes debut performances By JL Williams and Atzi Muramatsu, so we’ve decided to ticket it (£6 – £4 concession). You can buy tickets on this link: Tickets

Depending on fund raising success we hope to give ticket proceeds towards the Eigg Island Heritage Trust (I should find out by early February if we’ll receive funding. Fingers crossed!)

You can keep up with exhibition and event updates here: Eigg Island Facebook

Also, a welcome new addition to the exhibition is photographer Simon Nicholas White – who is very much an Eigg aficionado! He was on the island in 1998 when the community bought the island amid much celebration. His photographs are semi abstract works inspired by geology – a focus in to the textures and patterns of rock formations which are small worlds in themselves. I’m really looking forward to seeing them in the exhibition space. (Click on the link on his name to view images)

At the moment I’m in the midst of ordering art supplies for three of the largest paintings I’ve made so far. I’ll be focusing a lot on texture, and have ordered large quantities of molding paste, and glaze effects (normally I add lots of salt for texture and grittiness, but on this scale I’ve had to ‘upscale’ my materials!). Also some of my favourite paints – pthalo blue and green mixed with varnish for transparency

The works will be on three 40 x 40 inch wooden panels and I’m looking forward to working on these, having often worked on smaller pieces of wood. You can really play around with effects since wood is more resilient than canvas; scratches into the surface, layers and so on.

The themes are East, West and North Eigg (I wrote more about inspiration in the earlier post Here)

If you’re in on near Edinburgh on the 26th March, I hope you can attend the launch event which promises to be very atmospheric with poetry and music recitals inspired by Eigg and its landscape, or drop in between the 27th March to 21st April to see the exhibition